FIND ME in HAVANA by SERENA BURDICK 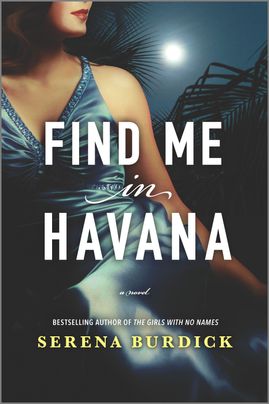 A novel based on the dazzling story of one of Hollywood’s most celebrated Hispanic actresses and her daughter’s search for closure.

Estelita Rodriguez is just nine years old when she begins singing in Havana, Cuba clubs. It is 1936 and her life will never be the same.

During the Cuban Revolution in 1933, her father lost everything and left them to join Batista. The family is now living in poverty, but Estelita’s mother sees how talented her daughter is and moves her to America.

Here she will sing at the Copacabana, meeting famous men and getting offers to go to Hollywood. With her mother by her side and her daughter, Nina, they get caught up in the craziness that is the entertainment business.

But things aren’t as rosy as they would seem. She has the worst taste in men and has her heart broken many times.

Told to the author by Nina. When Nina’s mother dies, she has a lot of questions. The story is told in letters written from Mother to Daughter and Daughter to Mother.

What she finds will tell a story of the sacrifices, the humiliation, the ugly side of not only Hollywood, but the ugliness of Cuba and the rebels who kept them hostage and did unspeakable things to them.

There is no bond stronger than the one between mothers and daughters. This was a beautifully told account and I cried and laughed and was just in awe of the strength of these women.

This is a story that hurts. There is no attempt to make it into a fairy tale. And that raw emotion is what made my heart ache for these women. There was no attempt to ‘pretty’ this up. It was honest and I loved it.

One response to “FIND ME in HAVANA by SERENA BURDICK”