THE MOLTEN CITY by Chris Nickson 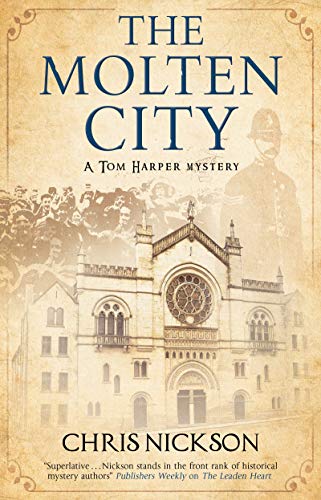 Detective Superintendent Tom Harper senses trouble ahead when the prime minister plans a visit. Can he keep law and order on the streets while also uncovering the truth behind a missing child?

Detective Superintendent Tom Harper has a bad feeling about the Prime Minister making a stop in Leeds. It’s September of 1908 and everyone is on edge. Whether it’s the Suffragettes or the massive amount of unemployed men, Tom has a feeling this is not going to turn out well.

As if that isn’t enough, someone has dropped him a letter claiming that a young boy, Andrew, was stolen from his family fourteen years prior. Looking into the case he finds very little in the file. In the middle of trying to hold off a riot over the Prime Ministers visit, he is also in the middle of a child abduction ring and some of the people involved do not intend to be captured.

Will Tom get things under control before the entire city goes up in smoke?

One response to “THE MOLTEN CITY by Chris Nickson”