A Sprinkling of Murder by Daryl Wood Gerber 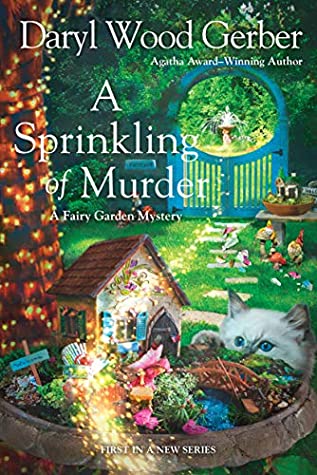 Fairy garden store owner Courtney Kelly believes in inviting magic into your life. But when uninvited trouble enters her shop, she’ll need more than a sprinkling of her imagination to solve a murder . . .

The first book in a new series. With fairies and fairy gardens and magical things happening all over Courtney’s shop. Courtney loves fairies. At least she did until her mother died when she was only ten, after that she lost her connection. Now she has left her dad’s landscaping business to follow her own dreams. Running a fairy garden business along with a tea shop.

Situated in lovely Carmel, Open Your Imagination, sells any and everything one would need to entice fairies into their gardens. She is even teaching classes and at 29 she has found her passion.

Until the dog groomer from across the street is found dead in her space. Courtney is now a suspect! With a little help from a friend or two, she is going to have to clear her own name!

What an enchanting new series! The characters are interesting and the pixie dust has some of them acting oddly. Grab a copy of this one.