ON THIS DAY WE WILL NEVER FORGET 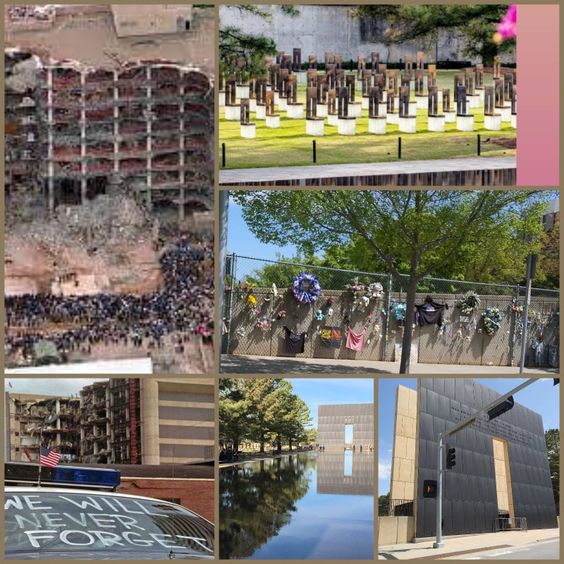 April 19, 1995.  A day that changed the country. A homegrown white boy parked a rented box truck in front of the Murrah Federal Building and a bomb detonated that left horror, outrage, grief, anger in a city that will never forget the ones who died, the ones who survived and all of the first responders who risked their own lives to rescue and recover so many people.

Domestic Terrorism. Killing over 168 people and injuring more than 680 others. It blew off a third of the building and the blast destroyed and damaged over 324 businesses in a 16 block radius. It was and still is the largest act of domestic terrorism.

The person responsible was arrested 90 minutes after the blast after being pulled over and arrested on warrants. He’s dead now.

In 1995 I was still in my Mississippi and this still shook my world. For OU Boy it was much more personal. This was a Federal Building. His Aunt Anne worked there and her daughter went to the daycare. Luckily, Heather was sick that day so Anne was home. Her husband, Kevin was with the OKCFD and was a first responder. I’ve never heard him talk about what he saw and did.

By the time I moved here after Katrina, the landscape downtown looked very different. Normally this day would be full of remembrances, church services and, the marathon. Not this year. OU Boy and I went yesterday to the site. A chair and a light for every victim. Items on the fence left to honor loved ones. The museum is closed but we went because we never want to forget what happened. What hate looks like. How 25 years later people are still struggling with what happened to them or their children.

This has now become the Oklahoma Standard. Coming together as one to do what it takes to care for each other. For my friends who were there that day, I love you. To the loved ones lost, I grieve and remember you.

7 responses to “ON THIS DAY WE WILL NEVER FORGET”