Hid from Our Eyes by Julia Spencer-Fleming 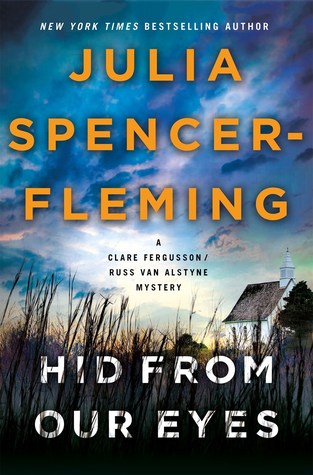 It’s been quite a few years since we were left hanging by the last book. And I am not one bit upset. It was worth the wait. And we are all grateful.

Clare is one of my favorite characters. She’s a former helicopter pilot and is now an Episcopal  Priest with a newborn baby and a Police Chief husband. These characters are deeply flawed and that is why I love them.

In 1952 the police chief was Harry McNeil. Called to an odd crime scene where he finds a dead young woman in a party dress. No shoes, no purse, no stockings, no obvious cause of death. With little to go on, it seemed like there was little done.

In 1972, Jack Liddle is Chief and is called to a crime scene with the exact same set of circumstances, in the same place. He remembers the first girl and the only thing different is this time they may have a suspect. Russ Van Alstyne found the body. Recently home from the war in Vietnam and still angry and confused, he is quickly the first suspect. But there is no evidence to support anyone being a person of interest.

Present Day. Russ is now the police chief and gets the call. Another young lady has been found in the same place. Dead, in a party dress and nothing else. The pressure is on for the crime to be solved. Especially since the town residents are getting ready to vote on keeping the police force or not.

While Clare is trying to juggle motherhood, the priesthood, her church, and breastfeeding, she still has time to do some digging into the case. And she does just that.

This one was very twisty and just when I thought I knew who the bad person was, I did not! And of course, we have a cliffhanger. And I love it!

One response to “Hid from Our Eyes by Julia Spencer-Fleming”