PRIDE of EDEN by TAYLOR BROWN 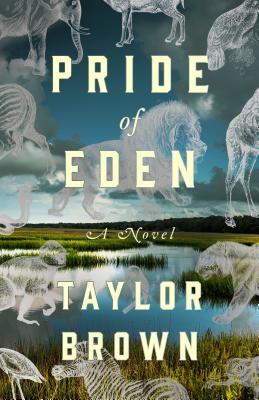 The enthralling new novel from the acclaimed author of Fallen Land, The River of Kings, and Gods of Howl Mountain

Little Eden is a wildlife sanctuary on the Georgia coast. Rather low rent and shabby. Much like the ruins of an entire development that failed when the interstate moved locations.

Anse Caulfield runs the place. We aren’t sure how he manages that financially but he is a character. A veteran of Vietnam, Jockey, and lover of all wild animals. Especially Henrietta, his prized cat that Anse loves fiercely. When she gets out and is killed, he is obsessed with finding more, saving more animals and righting wrongs.

Anse and Tyler, a vet, live together at the sanctuary and she worries endlessly about Anse.  When another former soldier and animal activist, Malay, shows up looking for work, Anse hires her. She feels the same respect for the animals and the rage at how they are treated. Along with local friend Lope, they take on the smugglers, the back alley sellers of rare cats who are soon abandoned and left to die.

But someone else wants one of the cats they saved. And for a reason, you won’t believe until you read it!

If you read The Gods of Howl Mountain, you know Brown has a gift for weaving stories and characters that is magical. For me personally, my family is from Sapelo Island and St. Simon’s Island. We grew up speaking Geechee and running wild much like the feral cattle left to roam the island. This was very personal to me. The cruelty of people to raise an animal by hand and then let men come in a fenced area to kill it is mindboggling. What kind of person does that?  Turns out, a lot of them.

Thank you, Mr. Brown, for another brilliant read!