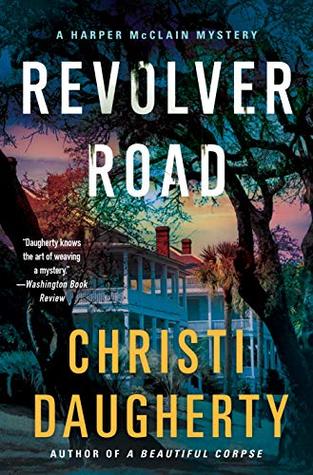 Crime reporter Harper McClain is back on the beat when a troubled musician vanishes in Christi Daugherty’s Revolver Road.

We’re back in Savannah with crime reporter Harper McClain. After being told to RUN!, she is hiding out on Tybee Island while she figures out who wants her dead.

In between working at the newspaper and trying to solve her mother’s murder, she is now on the case of who killed Xavier Rayne. An up and coming music star who was set to go on tour when he walked out of his rented beach house on Tybee. His girlfriend and two bandmates are acting very suspicious and when a body shows up with bullet holes they all become suspects.

Digging deeper into the case has her not quite sure who to believe and now threats against her own life are being made which have nothing to do with the Rayne case. Someone is watching her. Someone wants to protect her. Someone wants her dead.

Who can she trust?

I love this series. Every one. This book is the reason I did not see the Super Bowl! That is how edge of your seat crazy suspenseful this book is!

6 thoughts on “REVOLVER ROAD by CHRISTI DAUGHERTY (A HarperMcClain Mystery)”