THE FOUNDING FORTUNES: How The Wealthy Paid For and Profited From America’s Revolution by Tom Shachtman 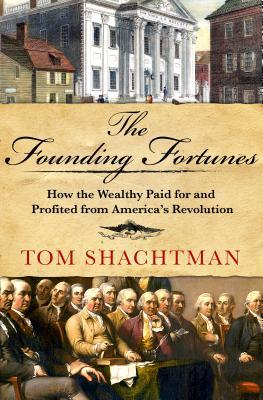 In The Founding Fortunes, historian Tom Shachtman reveals the ways in which a dozen notable Revolutionaries deeply affected the finances and birth of the new country while making and losing their fortunes.

In times of war, the rich usually do get richer and the poor are still poor, yet free. Somewhat.  This well-researched telling of the well known and not so well known who put their money into biting the very hand that was feeding them. In order to have control over what they grew and who they sold to this young country and its leaders were far from perfect and often put their own interests above the country.

The British wanted total control and the John Hancocks and George Washingtons of the time wanted the opposite. To control their own taxes, representations, to settle their own disputes and have free trade. We also meet a lot of people who were less well-known but never the less played significant roles in this time period.

Several things struck me reading this book. One, these guys did not have, as a rule, long lives. So what they accomplished as very young men was astounding. They were determined to define their own destiny in this new world. They had left England for a reason and that was the freedom to determine their own fate.

Excellent research and a much-needed history lesson for the times!

One response to “THE FOUNDING FORTUNES: How The Wealthy Paid For and Profited From America’s Revolution by Tom Shachtman”