WINTER OF DESPAIR by CORA HARRISON 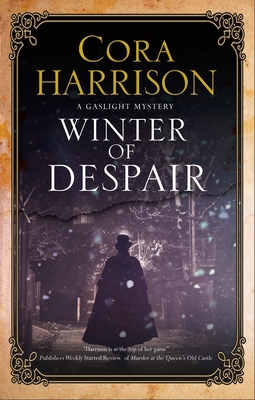 Dickens and Wilkie are back in the second installment of the Gaslight Series. Along with some of our favorite characters from the first book.

It’s the year 1853, in November and Dickens and Wilkie have been summoned by Inspector Fields to the scene of a murder. The murder of a well-known artist whom they recognize immediately. Wilkie’s brother Charles has worked with the artist who now lies dead along with a painting that has also been slashed beyond recognition. The only thing they know is the title of Winter of Despair.

But they also find several other paintings of people indulging in rather sinful behavior. What makes it difficult is there are no faces. Just hints of hair color or style, clothing style are there. Hoping to flush out the killer Mrs. Collins hosts a dinner with all of the artist’s subjects and there are certainly enough poorly behaved people to go around. But which one is the killer?

Sesina is still working for the Collins family and Charley is her favorite. He’s fragile and is acting awfully suspicious. Sesina is going to make it her business to make sure he is not accused of killing the said artist.

Full of intrigue, history and amateur sleuths, this new series is turning out quite well!

What I love most about this series is these are real people and real events. The story is a wonderful mix of facts and speculation that makes a good read.