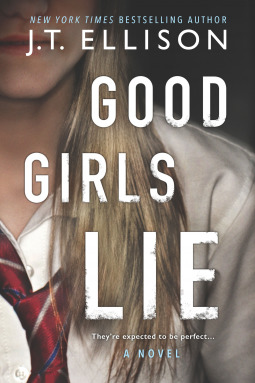 “There are truths, and there are lies, and then there is everything that really happened, which is where you and I will meet.”

I am a sucker for a good boarding school thriller/mystery!  This tale of teenage girls at a prestigious boarding school just for girls, The Goode School, is anything but good! These are some seriously privileged and mean girls.

After her parents’ deaths, Ash is shipped off to The Good School. She has changed her name to avoid the publicity of the deaths and all she wants is to study and stay under the radar. Not going to happen. Someone always knows someone who can find out what you want to stay hidden.

The school is full of children of wealth and privilege whose parents are high profile people with little time for their own children, much better to send them to a snooty school that seems perfect on the outside but rotten on the inside. Including the Dean!

I am not sure there was one decent character in this book! Girls start to seriously hurt each other and then the deaths begin. Ash is sure she knows who is behind it, but will anyone believe her now? And is she even Ash??

And once secrets begin to spill out, everyone is left exposed. I loved every wicked minute of this one! 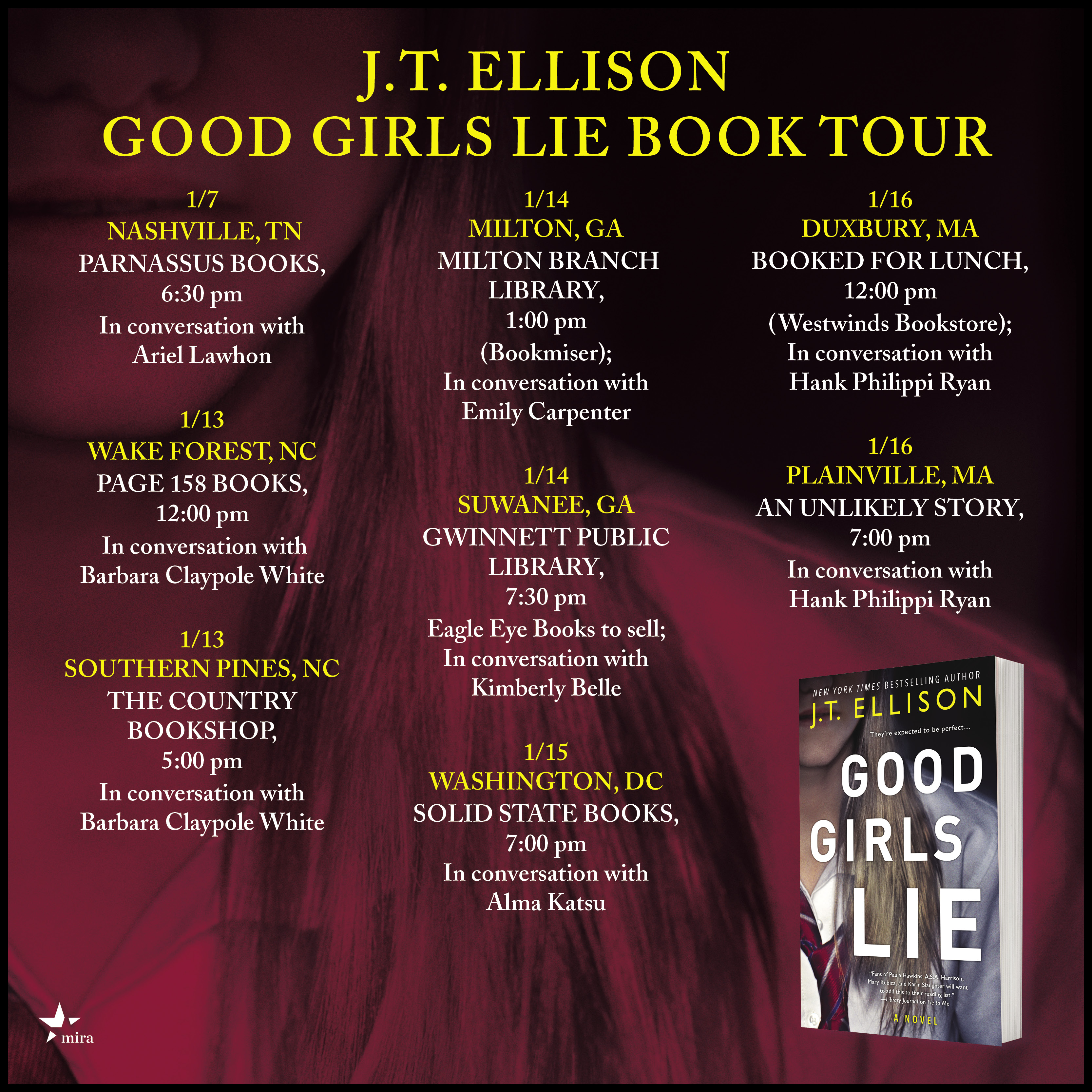 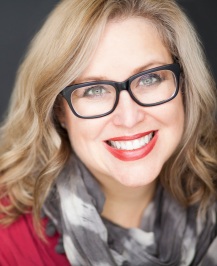 The girl’s body dangles from the tall iron gates guarding the school’s entrance. A closer
examination shows the ends of a red silk tie peeking out like a cardinal on a winter branch, forcing her
neck into a brutal angle. She wears her graduation robe and multicolored stole as if knowing she’ll never
see the achievement. It rained overnight and the thin robe clings to her body, dew sparkling on the
edges. The last tendrils of dawn’s fog laze about her legs, which are five feet from the ground.
There is no breeze, no birds singing or squirrels industriously gathering for the long winter
ahead, no cars passing along the street, only the cool, misty morning air and the gentle metallic creaking
of the gates under the weight of the dead girl. She is suspended in midair, her back to the street, her
face hidden behind a curtain of dirty, wet hair, dark from the rains.
Because of the damage to her face, it will take them some time to officially identify her. In the
beginning, it isn’t even clear she attends the school, despite wearing The Goode School robes.
But she does.
The fingerprints will prove it. Of course, there are a few people who know exactly who is
hanging from the school’s gates. Know who, and know why. But they will never tell. As word spreads of
the apparent suicide, The Goode School’s all-female student body begin to gather, paying silent,
terrified homage to their fallen compatriot. The gates are closed and locked—as they always are
overnight—buttressed on either side by an ivy-covered, ten-foot-high, redbrick wall, but it tapers off
into a knee-wall near the back entrance to the school parking lot, and so is escapable by foot. The girls of
Goode silently filter out from the dorms, around the end of Old West Hall and Old East Hall to Front
Street—the main street of Marchburg, the small Virginia town housing the elite prep school—and take
up their positions in front of the gate in a wedge of crying, scared, worried young women who glance
over shoulders looking for the one who is missing from their ranks. To reassure themselves this isn’t
their friend, their sister, their roommate.
Another girl joins them, but no one notices she comes from the opposite direction, from town.
She was not behind the redbrick wall.
Whispers rise from the small crowd, nothing loud enough to be overheard but forming a single
question.
Who is it? Who?
A solitary siren pierces the morning air, the sound bleeding upward from the bottom of the hill,
a rising crescendo. Someone has called the sheriff.
Goode perches like a gargoyle above the city’s small downtown, huddles behind its ivy-covered
brick wall. The campus is flanked by two blocks of restaurants, bars, and necessary shops. The school’s
buildings are tied together with trolleys—enclosed glass-and-wood bridges that make it easy for the girls
to move from building to building in climate-controlled comfort. It is quiet, dignified, isolated. As are the

girls who attend the school; serious, studious. Good. Goode girls are always good. They go on to great
things.
The headmistress, or dean, as she prefers to call herself, Ford Julianne Westhaven, great-
granddaughter several times removed from the founder of The Goode School, arrives in a flurry, her
driver, Rumi, braking the family Bentley with a screech one hundred feet away from the gates. The
crowd in the street blocks the car and, for a moment, the sight of the dangling girl. No one stops to think
about why the dean might be off campus this early in the morning. Not yet, anyway.
Dean Westhaven rushes out of the back of the dove-gray car and runs to the crowd, her face
white, lips pressed firmly together, eyes roving. It is a look all the girls at Goode recognize and shrink
from.
The dean’s irritability is legendary, outweighed only by her kindness. It is said she alone
approves every application to the school, that she chooses the Goode girls by hand for their intelligence,
their character. Her say is final. Absolute. But for all her goodness, her compassion, her kindness, Dean
Westhaven has a temper.
She begins to gather the girls into groups, small knots of natural blondes and brunettes and
redheads, no fantastical dye allowed. Some shiver in oversize school sweatshirts and running shorts,
some are still in their pajamas. The dean is looking for the chick missing from her flock. She casts
occasional glances over her shoulder at the grim scene behind her. She, too, is unsure of the identity of
the body, or so it seems. Perhaps she simply doesn’t want to acknowledge the truth.
The siren grows to an earsplitting shriek and dies midrange, a soprano newly castrated. The
deputies from the sheriff’s office have arrived, the sheriff hot on their heels. Within moments, they
cordon off the gates, move the students back, away, away. One approaches the body, cataloging;
another begins taking discreet photographs, a macabre paparazzi.
They speak to Dean Westhaven, who quietly, breathlessly, admits she hasn’t approached the
body and has no idea who it might be.
She is lying, though. She knows. Of course, she knows. It was inevitable.
The sheriff, six sturdy feet of muscle and sinew, approaches the gate and takes a few shots with
his iPhone. He reaches for the foot of the dead girl and slowly, slowly turns her around.
The eerie morning silence is broken by the words, soft and gasping, murmurs moving sinuously
through the crowd of girls, their feet shuffling in the morning chill, the fog’s tendrils disappearing from
around the posts.
They say her name, an unbroken chain of accusation and misery.
Ash.
Ash.
Ash.

There are truths, and there are lies, and then there is everything that really happened, which is where
you and I will meet. My truth is your lie, and my lie is your truth, and there is a vast expanse between
them.
Take, for example, Ash Carlisle.
Six feet tall, glowing skin, a sheaf of blond hair in a ponytail. She wears black jeans with rips in
the knees and a loose greenand-white plaid button-down with white Adidas Stan Smiths; casual,
efficient travel clothes. A waiter delivers a fresh cup of tea to her nest in the British Airways first-class
lounge, and when she smiles her thanks, he nearly drops his tray—so pure and happy is that smile. The
smile of an innocent.
Or not so innocent? You’ll have to decide that for yourself. Soon.
She’s perfected that smile, by the way. Practiced it. Stood in the dingy bathroom of the flat on
Broad Street and watched herself in the mirror, lips pulling back from her teeth over and over and over
again until it becomes natural, until her eyes sparkle and deep dimples appear in her cheeks. It is a full-
toothed smile, her teeth straight and blindingly white, and when combined with the china-blue eyes and
naturally streaked blond hair, it is devastating.
Isn’t this what a sociopath does? Work on their camouflage? What better disguise is there than
an open, thankful, gracious smile? It’s an exceptionally dangerous tool, in the right hands.
And how does a young sociopath end up flying first class, you might ask? You’ll be assuming her
family comes from money, naturally, but let me assure you, this isn’t the case. Not at all. Not really. Not
anymore.
No, the dean of the school sent the ticket.
Why?
Because Ash Carlisle leads a charmed life, and somehow managed to hoodwink the dean into
not only paying her way but paying for her studies this first term, as well. A full scholarship, based on her
exemplary intellect, prodigy piano playing, and sudden, extraordinary need. Such a shame she lost her
parents so unexpectedly.
Yes, Ash is smart. Smart and beautiful and talented, and capable of murder. Don’t think for a
moment she’s not. Don’t let her fool you.
Sipping the tea, she types and thinks, stops to chew on a nail, then reads it again. The essay she
is obsessing over gained her access to the prestigious, elite school she is shipping off to. The challenges
ahead—transferring to a new school, especially one as impossible to get into as The Goode
School—frighten her, excite her, make her more determined than ever to get away from Oxford, from
her past.

A new life. A new beginning. A new chapter for Ash.
But can you ever escape your past?
Ash sets down the tea, and I can tell she is worrying again about fitting in. Marchburg,
Virginia—population five hundred on a normal summer day, which expands to seven hundred once the
students arrive for term—is a long way from Oxford, England. She worries about fitting in with the
daughters of the DC elite—daughters of senators and congressmen and ambassadors and reporters and
the just plain filthy rich. She can rely on her looks—she knows how pretty she is, isn’t vain about it,
exactly, but knows she’s more than acceptable on the looks scale—and on her intelligence, her
exceptional smarts. Some would say cunning, but I think this is a disservice to her. She’s both booksmart
and street-smart, the rarest of combinations. Despite her concerns, if she sticks to the story, she will fit
in with no issues.
The only strike against her, of course, is me, but no one knows about me.
No one can ever know about me.