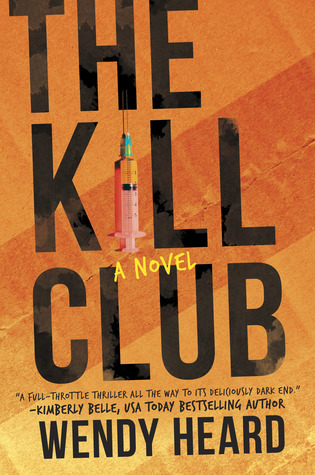 Jazz is a bad-ass. She’s had a hard life and now she is doing everything in her power to protect her little brother from their foster mother, Carol, a religious nutjob who decides the boy doesn’t need his diabetic medication as God is going to heal him.

As Jazz takes on beatings and sneaks the boys’ meds to his teacher or through the bars of his window, things are getting worse. Then she gets a call from an unknown number and learns that she isn’t alone and there could be an end to Carol’s reign of terror.

All she has to do is kill someone. Can she do that? Learning about an underground group calling themselves The Blackbirds, they kill a stranger and a stranger kills their problem. Sound familiar?  Strangers on a Train?

There is a lot at stake in this thriller and the author has made Jazz very real and vulnerable, but also very brave.

Heard is so great at the build-up that by the end of the book you hope you have a fingernail left!

Today is our stop on the Blog Tour for The Kill Club by Wendy Heard! Here is a little taste!

THE CEILING ABOVE the crowd sparkles with strings of golden lights. They twinkle just bright enough to
illuminate the faces. I adjust a microscopic issue with my toms and run my fingers through my bangs,
straightening them over my eyes. The guys are tuning up, creating a clatter of discordant notes in the
monitors. When they’re done, they approach my kit for our usual last-minute debate about the setlist.
Dao humps his bass in his ready-to-play dance, black hair swishing around his shoulders. “Dude, stop,”
Matt groans and readjusts the cable that connects his Telecaster to his pedalboard.
“Your mom loves my dancing,” Dao says.
“You dance like Napoleon Dynamite,” Matt retorts.
“Your mom dances like Napoleon Dynamite.”
Andre raises his hands. “Y’all both dance like Napoleon Dynamite, and so do both your moms, so
let’s just—”
I wave a stick at them. “Guys. Focus. The sound guy is watching. We’re three minutes behind.” I
have no patience for this shit tonight. This all feels extra and stupid. I should be doing something to help
Joaquin. His dwindling supply of insulin sits at the front of my brain like a ticking clock.
The guys get into their spots, the distance between them set by muscle memory. Andre leans
forward into the mic and drawls, “Arright DTLA, lez get a little dirty in here.” His New Orleans accent
trickles off his tongue like honey.
The room inhales, anticipates, a sphere of silence.
“Two three four,” I yell. I clack my sticks together and we let loose, four on the floor and loud as
hell. I’m hitting hard tonight. It feels great. I need to hit things. My heart beats in tempo. My arms fly
through the air, the impact of the drums sharp in my joints, in my muscles, the kick drum a pulse
keeping the audience alive. This is what I love about drumming, this forcing of myself into the crowd,
making their hearts pound in time to my beat.
Dao fucks up the bridge of “Down With Me” and Andre gives him some vicious side-eye. The
crowd is pressed tight up against the stage. A pair of hipsters in cowboy hats grabs a corresponding pair
of girls and starts dancing with them. I cast Dao an eye-rolling look referring to the cowboy hats and he
wiggles his eyebrows at me. I stomp my kick drum harder, pretending it’s Carol’s face.
The crowd surges back. Arms fly. A guy in the front staggers falls. A pair of hands grip the
stage and a girl tries to pull herself up onto it.
Matt and Dao stop playing. The music screeches to a halt.
“What’s going on?” I yell.
“Something in the pit,” Dao calls back.
Andre drops his mic and hops down into the crowd. Dao and Matt cast their instruments aside
and close the distance to the edge of the stage. I get up and join them. Together, we look down into the
pit.

A clearing has formed around a brown-haired guy lying on the floor. Andre and the bouncer
squat by him as he squirms and thrashes, his arms and legs a tangle of movement. Andre’s got his phone
pressed to his ear and is talking into it urgently. The bouncer is trying to hold the flailing man still, but
the man’s body is rigid, shuddering out of the bouncer’s grip. He flops onto his back, and I get a good
look at his face.
Oh, shit, I know this guy. He’s a regular at our shows. He whines and pants muffled words
gargling from his throat. Some of the bystanders have their phones out and are recording this. Assholes.
The man shrieks like a bird of prey. The crowd sucks its whispers back into itself, and the air
hangs heavy and hushed under the ceiling twinkle lights.
Andre is still talking into his phone. The bouncer lifts helpless hands over the seizing man,
obviously not sure what to do.
I should see if Andre wants help. I hop down off the stage and push through the crowd. “Excuse
me. Can you let me through? Can you stop recording this and let me through?”
I’m suddenly face-to-face with a man who is trying to get out of the crowd as hard as I’m trying
to get into it. His face is red and sweaty, his eyes wild. “Move,” he orders me.
Dick. “You fucking move.”
“Bitch, move.” He slams me with his shoulder, knocking me into a pair of girls who cry out in
protest. I spin, full of rage, and reverse direction to follow him.
“Hey, fucker,” I scream. He casts a glance over his shoulder. “Yeah, you! Get the fuck back
here!”
He escalates his mission to get out of the crowd, elbowing people out of his way twice as fast.
I’m smaller and faster, and I slip through the opening he leaves in his wake. Just before he makes it to
the side exit, I grab his flannel shirt and give him a hard yank backward. “Get the fuck back here!” I’m
loose, all the rage and pain from earlier channeling into my hatred for this entitled, pompous asshole.
I know I should rein it in, but he spins to face me and says, “What is your problem, bitch?” And
that’s it. I haul back and punch him full in the jaw.
He stumbles, trips over someone’s foot and lands on his ass on the cement floor. His phone goes
clattering out of his hand, skidding to a stop by someone’s foot. “The hell!”
“Oh, shit,” cries a nearby guy in a delighted voice.
“Fucking bitch,” the guy says, and this is the last time he’s calling me a bitch. I go down on top of
him, a knee in his chest. I swing wild, hit him in the jaw, the forehead, the neck. He throws an elbow; it
catches me in the boob and I flop back off him with a grunt of pain. He sits up, a hand on his face, and
opens his mouth to say something, but I launch myself off the ground again, half-conscious of a chorus
of whoops and howls around us. I throw a solid punch. His nose cracks. Satisfaction. I almost smile.
Blood streams down his face.
“That’s what you get,” I pant. He crab-shuffles back, pushes off the ground and sprints for the
exit. I let him go.

My chest is heaving, and I have the guy’s blood on my hand, which is already starting to ache
and swell. I wipe my knuckles on my jeans.
His phone lights up and starts buzzing on the floor. I pick it up and turn it over in my hand. It’s an
old flip phone, the kind I haven’t seen in years. The bright green display says Blocked.
Back in the pit, the man having a seizure shrieks again, and then his screams gurgle to a stop. I
put the phone in my pocket and push through the onlookers. I watch as his back convulses like he’s
going to throw up, and then he goes limp. A thin river of blood snakes out of his open mouth and trails
along the cement floor.
The room echoes with silence where the screams had been. A trio of girls stands motionless,
eyes huge, hands pressed to mouths.
The flip phone in my pocket buzzes. I pull it out, snap it open and press it to my ear. “Hello?”
A pause.
“Hello?” I repeat.
A click. The line goes dead.
A set of paramedics slams the stage door open, stretcher between them. “Coming through!”
They kneel down and start prodding at the man curled up on the concrete. His head flops back. His eyes
are stretched wide and unseeing, focused on some point far beyond the twinkling ceiling lights.
Next to him on the concrete lies something… What is it? It’s rectangular and has red and—
It’s a playing card.

4 thoughts on “THE KILL CLUB by WENDY HEARD *BLOG TOUR*”