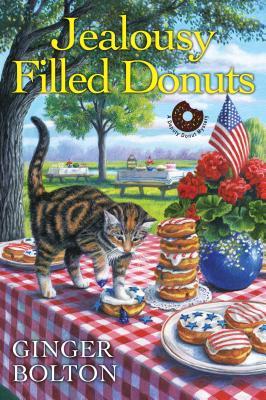 When a firecracker becomes a murder weapon, Emily Westhill pursues a killer with a short fuse …

This is the third book in the Deputy Donut Series and it just keeps getting better!

Like it or not, Cops and Donuts go together like peanut butter and jelly. And Emily Westhill should know. Her own husband was a detective and her father-in-law, Tom, is the retired police chief in Fallingbrook, Wisconsin. Tom is also her partner in the shop.

The best thing is the Donut car. Emily has turned an old police cruiser into a mascot for the donut shop and it sounds really fun. This time Emily is making donuts for the annual Fourth of July celebration in town, with red, white and blue jelly-filled donuts.

She is also transporting the King and Queen in her car. Or she was supposed to. The Queen is a real piece of work and refuses to ride in a donut car, she then proceeds to annoy and anger everyone there.

Everyone is enjoying the fireworks when one explodes from a pile of donuts and lodges itself in the Queen’s back, shutting her up for good.

But more than one someone is trying to make Emily look guilty and no matter what she is going to stick her nose into this mystery. But when things get sticky will her friends be able to figure out where she is and get there in time to save her from becoming the next victim?

I love this series. It’s smart, funny, and the characters are so real. And the donuts. And coffee. By the time finished this one all I wanted was a raspberry filled donut! I could smell them. Then Boom! There’s a recipe and now I’m making a donut. I will now wait patiently (not) for the next one.