THE MOONSHINER’S DAUGHTER by DONNA EVERHART 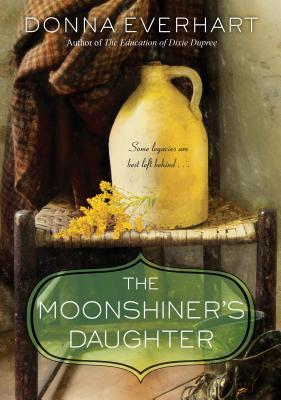 Set in North Carolina in 1960 and brimming with authenticity and grit, The Moonshiner’s Daughter evokes the singular life of sixteen-year-old Jessie Sasser, a young woman determined to escape her family’s past . . .

Welcome to the Bushy Mountains in North Carolina. The Sasser family has been making shine for generations, along with quite a few other folks. It’s a dangerous and deadly job. But it’s the only thing most of them know.

Set in 1960, this is the story of Jessie Sasser. A girl who blames moonshine for her mothers’ death when she was a small child. Her memories of that day aren’t clear on much except her mother was stirring the still and then her mother was dead.

Her daddy won’t talk about her mother or her death so Jessie puts up a hunger strike which leads to an eating disorder. On this one thing, they are locked in a battle over. He won’t answer questions, she won’t eat the food bought by blood money.

Jessie is not going to stop until she finds answers. And finding those answers will have repercussions for the entire family.

This was a beautifully written and heartbreaking story. Generations of families mad at each other and willing to do anything to make and sell their product and stay out of the revenuers’ way.

A historical fiction character with an eating disorder was a first for me. I cried as Jessie wasted away, still seeing that fat girl in the mirror. I cried for the loss of her mother, for her own inner turmoil about who she was and what she wanted her life to be.

4 responses to “THE MOONSHINER’S DAUGHTER by DONNA EVERHART”