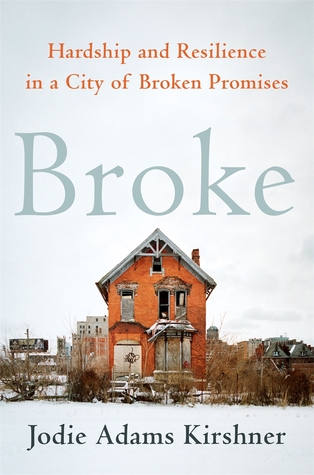 The author has taken a hard look at the state of affairs in Detroit. Through the voices of seven people whose lives have been changed forever by the mismanagement of the city and its eventual bankruptcy.

I visited Detroit regularly during the late ’80s and through the ’90s. It was a huge, sprawling place and going downtown was heartbreaking. To see block after block of neglected and abandoned homes and businesses.

There is enough blame to go around in this look at how cities are not getting the support they need to provide the services people need to survive and thrive. Everything is broken. The real estate market, the banks, the inept leadership, the lack of state and federal support.

About 40 percent of the city lives below the poverty level. Where is the investment in creating new jobs? How do these opportunists get by with paying $1000 for a…

One thought on “BROKE: Hardship and Resilience in a City of Broken Promises by Jodie Adams Kirshner”