Puddin’ on the Blitz by Tamar Myers 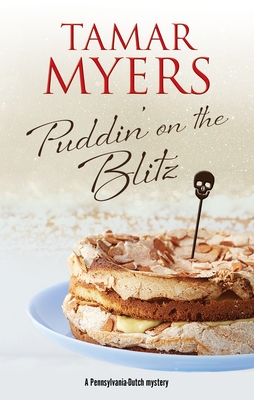 The success of Magdalena Yoder’s new Amish-Asian restaurant is threatened by murder in the deliciously quirky new Pennsylvania-Dutch mystery.

A murder mystery with an Amish/Mennonite theme.

Magdalena Yoder is Mennonite and married to a Jew. Her mother-in-law is a piece of work and lives across the street with the other members of her apathy cult.

Hiring Barbara Hostetler was a genius as she is a wonderful cook and baker. And soon enough we have a recent patron dropping dead.

Now Magdalena is being arrested for a murder she did not commit. Who is setting her up?

I almost stopped a quarter of the way in because I wasn’t sure if this was satire or sarcasm. I couldn’t pronounce the names of anyone and I just did not care for the main character. I wasn’t sure if she was making fun of the people or if she just had a sarcastic tongue, which doesn’t really add up with the Amish.

It was less than okay, but you can read it yourself and let me know!