Since I am not a native Oklahoman, but a Georgia/Mississippi girl, I couldn’t imagine any authors of note coming all the way to Oklahoma. At the same time as the State Fair, which always means days of rain. But boy was I in for a surprise! So in the pouring down rain and winds, off we went to the Boathouse District, hoping people would come out. Well you know book people, we don’t care if it’s a tornado, we’re going to get our books signed!

I’ve been looking forward to this for months now. As soon as I heard Scott Pelley and Anne Hillerman were going to headline, brought to us by the lovely Jane Anne Jayroe, an Oklahoma native who has had a huge impact in many areas. She met Scott Pelley working as a young on-air reporter in Dallas. He also married a Jane from a small Oklahoma town. She has been Miss Oklahoma, Miss America and worked for former Governor Frank Keating. She’s involved in everything and is a beautiful person. 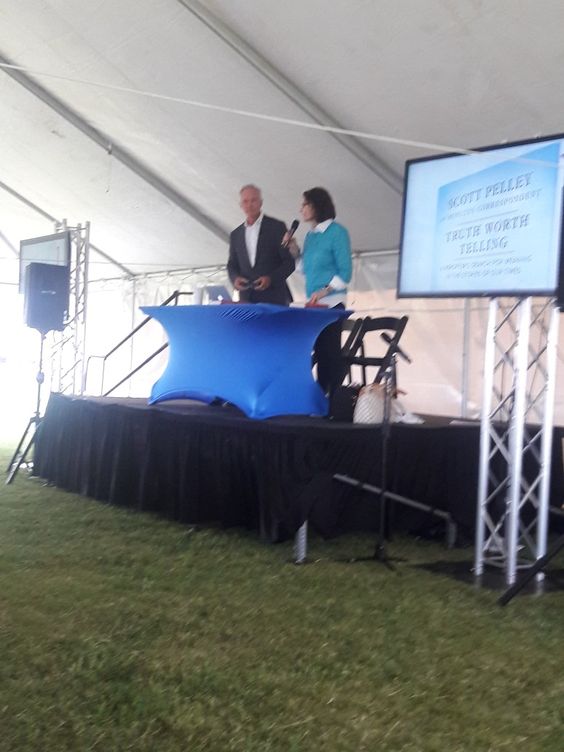 Here is Jane introducing Scott and his book. He was such a good sport about the weather! And he made me cry like a baby, but so did his book. We were sitting between the former governor and Jane. At the end of his reading and chat he said, “I’ve never been to a tent revival, but I guess now I have!” And then proceeded to be gracious and had people standing in a long line for books. I did not stand in line as I had the book.

Then look who I bumped into! Our own author from Norman,OK, Eileen Hobbs who writes great children’s books. 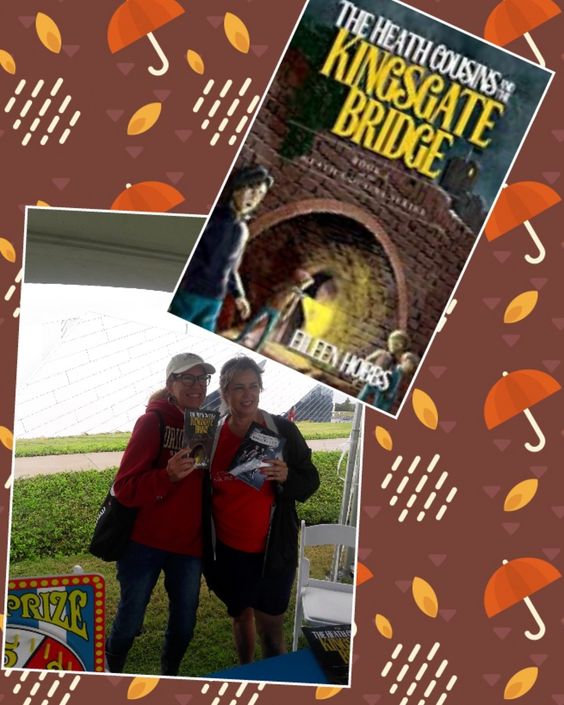 She is used to our crazy weather and wasn’t in the least fazed! The grands love this series!

Since I had just finished Sheila Robert’s “A Christmas From The Heart”, I had to go see Sheila! 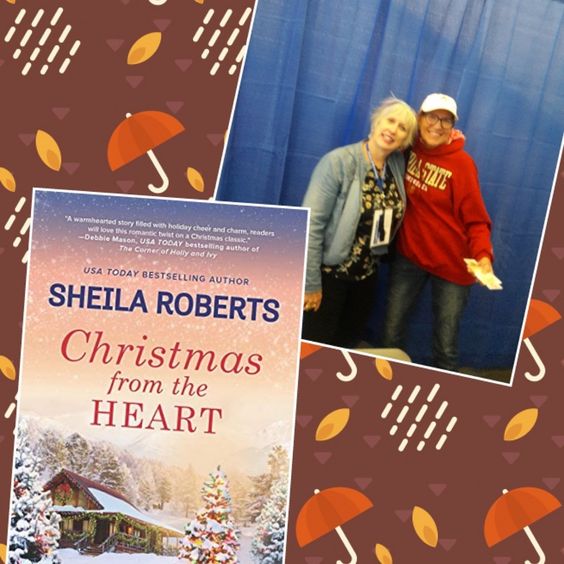 What a sweetheart. All the way from Seattle, she’s used to rain but I was thrilled that she came to again, Oklahoma! What a gracious and lovely lady!

I had two ulterior motives for throwing in with this festival. The red double-decker coffee bus and the 100% Vegan food truck. And I was not disappointed! 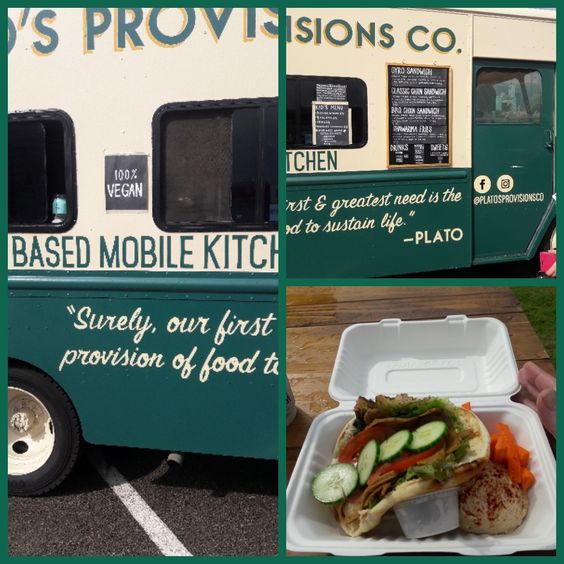 Plato’s Provisions is a truck I’ve been trying to pin down for a bit now. Now I have a schedule. The food is fresh, plentiful and delicious! And the people are so nice! Now you know OU Boy isn’t eating this. Oh no, he went to the hotdog truck, which doesn’t deserve a picture. 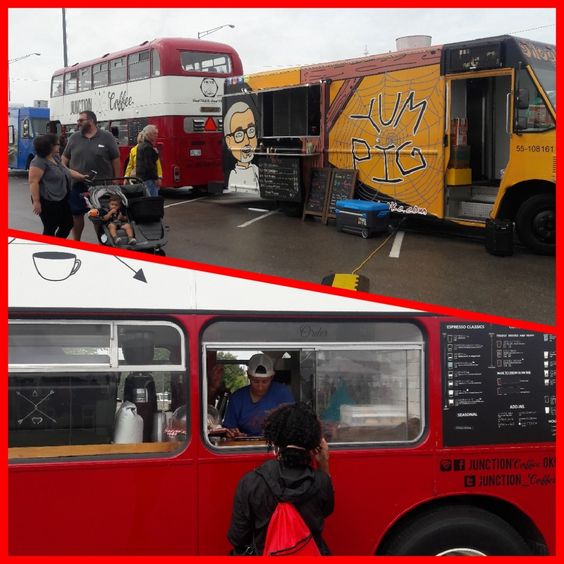 Our version of a London double-decker bus! And yes you can sit up top! Junction Coffee. Seriously the best coffee I have ever had! Better than Starbucks. And again, I got their schedule!

We ran by the Farmer’s Market on the way home to change out of rain clothes and into “it’s hot as hell and humid” clothes. 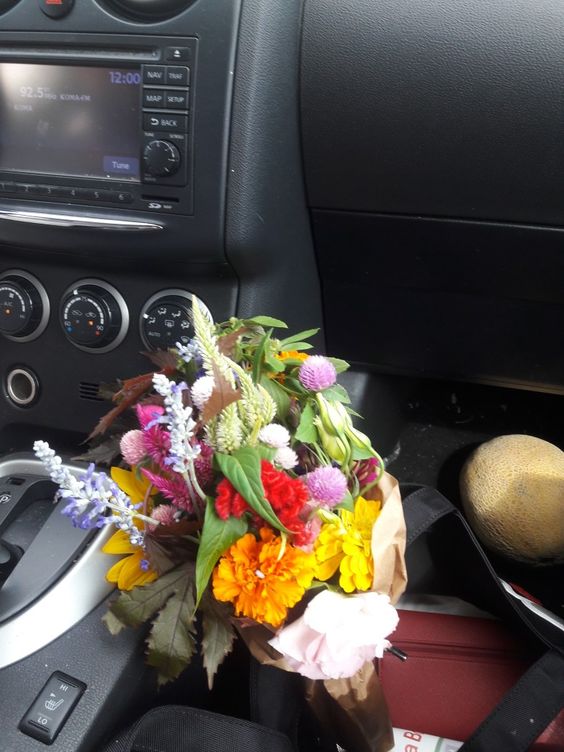 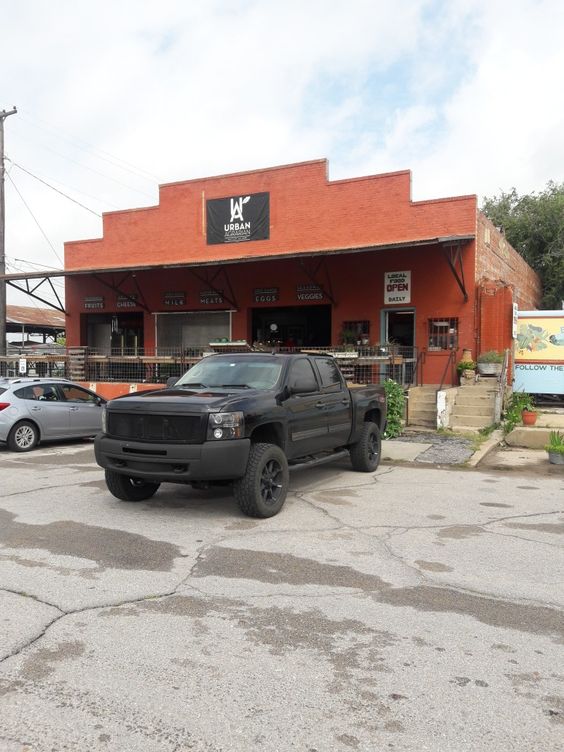 The Urban Agrerion sells produce and products from local sources only. OU Boy found a perfectly ripe cantaloupe and I grabbed a gorgeous little bouquet of wildflowers, sunflowers, and herbs. Smells delish!

And finally, I tried doing a video. Just scanning the entire area and apparently, I forgot it was on. So that part at the end was some college kid staring me down over my FSU hoodie. If you didn’t already know my first language is sarcasm, you will shortly.