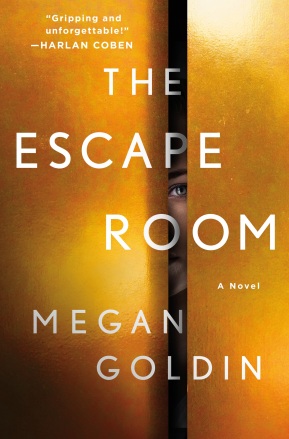 “Welcome to the Escape Room. Your goal is simple. Get out alive.”

Escape rooms can be really fun and right now they are all over the place and getting pretty creative. The premise is simple enough. A group of people locked in a room. Together they must look at clues that will allow them to escape. The clues are rarely straight forward and more than once will have you backtracking. In the real world, if you run out of time, they just let you out and you can do the walk of shame.

This isn’t that type of story. In this story, four very competitive co-workers are told that on this Friday evening they will be participating in an escape room challenge. None of them wants to do any team-building exercises, but they also want to keep their jobs and the money that goes with those jobs, so they show up in a building that is undergoing construction, waiting for an elevator to take them to the escape room.

Little do they know as the elevator rises to the 70th floor that they are already in the escape room. And for the next few days, all of their dirty little secrets, failings, and crimes come out and they must all deal with their own shameful behaviors. And most importantly, which one of them is a killer?

The Escape Room by Megan Goldin

Synopsis:
In Megan Goldin's unforgettable debut, The Escape Room, four young Wall Street rising
stars discover the price of ambition when an escape room challenge turns into a lethal
game of revenge.
Welcome to the escape room. Your goal is simple. Get out alive.
In the lucrative world of finance, Vincent, Jules, Sylvie, and Sam are at the top of their game.
They’ve mastered the art of the deal and celebrate their success in style—but a life of extreme
luxury always comes at a cost.
Invited to participate in an escape room as a team-building exercise, the ferociously competitive
co-workers crowd into the elevator of a high rise building, eager to prove themselves. But when
the lights go off and the doors stay shut, it quickly becomes clear that this is no ordinary
competition: they’re caught in a dangerous game of survival.
Trapped in the dark, the colleagues must put aside their bitter rivalries and work together to solve
cryptic clues to break free. But as the game begins to reveal the team’s darkest secrets, they
realize there’s a price to be paid for the terrible deeds they committed in their ruthless climb up
the corporate ladder. As tempers fray, and the clues turn deadly, they must solve one final
chilling puzzle: which one of them will kill in order to survive?

Author Bio:
MEGAN GOLDIN worked as a correspondent for Reuters and other media outlets where she
covered war, peace, international terrorism and financial meltdowns in the Middle East and Asia.
She is now based in Melbourne, Australia where she raises three sons and is a foster mum to
Labrador puppies learning to be guide dogs. THE ESCAPE ROOM is her debut novel.