A STRANGER ON THE BEACH by MICHELE CAMPBELL 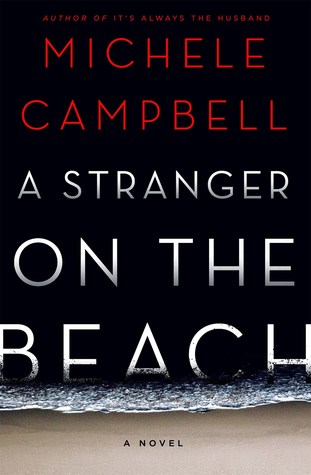 Told from two points of view, this thriller actually cost me a fingernail!

Caroline is living the dream. A successful interior designer, who quit to raise her daughter who is now off to college, she is determined to get back in the game and earn her own money. Her husband works long, hard hours in order to provide a lifestyle it would seem they both enjoy.

Staring out the expansive glass windows Caroline spots a man on the beach. Staring at her house. She debates calling the police since he isn’t really doing anything, but at the same time, there have been burglaries lately in this enclave for the rich and famous. Later she will say she wished she had called the police.

Aiden is a bartender in a local bar. Having served time for manslaughter and now determined to show his Chief-of -Police brother that he has changed. He isn’t a teenager anymore and is tired of being treated like trash.

At Caroline’s housewarming party everyone wants to know where Jason is. Even her husbands boss isn’t believing her story of him running late. Later when he shows up with a Russian hussy in tow everything blows up and in front of God and everyone he leaves with the Russian girl and wants a divorce.

That is all I’m giving away. Let me just say this was one twisted puzzle that had me speechless for a good hour in the end. What???  I did not see that coming. The pace was perfect. The timing was everything in this wickedly good thriller!

2 responses to “A STRANGER ON THE BEACH by MICHELE CAMPBELL”