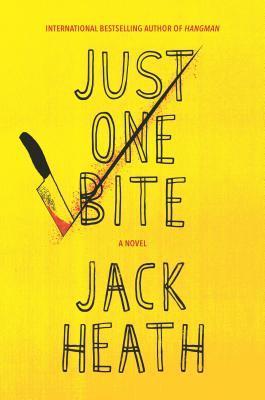 If Dexter and Hannibal Lector had a love child it would be Timothy Blake.

We first met Blake in Hangman. He was working with the FBI and really liked Thistle, his handler. Attracted to her but afraid he may end up eating her, Blake left the job and ended up working for a crime boss disposing of bodies. The perfect job for him, right?

This one begins with Blake waiting impatiently in the middle of nowhere for a body drop off. Only things go wrong quickly and Blake ends up being called in again by Thistle and the FBI to track down a missing man. Blake is more than ready to help. Especially as the man is currently awaiting dethawing in his freezer.

It seems there is a serial killer on the loose! As he and Thistle work together to find the killer, his actual boss is getting a bit uncomfortable with him working with the FBI and Blake may be the next body found. And as Thistle begins to thaw a bit toward him, she also has the best shot at discovering what he does and who he is.

This is some gruesome reading! And I will be reading the next one just as fast!

What has a neck but no head?

If Charlie Warner wants you dead, first she steals your shoes.

Not in person. She has people all over Houston.

One of them is James Tyrrell, a pudgy guy with Coke-bottle glasses and scar tissue on his arm where the number 88 used to be. A coded white-supremacist tattoo—H is the eighth letter of the alphabet. The 88 means Heil Hitler. “I’m no Nazi,” I heard him say once. “But if you want to survive Huntsville prison, you gotta pick a team.”

Tyrrell will open your front door with a police-issue lock-release gun and go to your bedroom wearing latex gloves and a hairnet. He’ll steal your most expensive pair of shoes. Usually black, always shiny—the kind you might wear to a funeral. He’ll take some socks, too, but won’t touch anything else on his way out.

Two more guys will drive a white van with stolen plates to wherever it is you work. Their names are Jordan Francis and Theo Sariklis. They both have thick necks, square jaws, and crew cuts. It took me a while to tell them apart. Sariklis is the one with the drooping eyelid and the Ramones shirt. He’s been working for Warner longer than me. Francis is new—just moved here from San Jose, California. He’s the one who cracks jokes. Even in winter, he wears a wife-beater to show off his biceps. He might go to the gym after killing you.

Francis will park the van next to the driver’s side of your car. Sariklis will open the sliding door on the side of the van and wait.

You’ll walk out of the office and approach your car. When you go to open the door, Francis will grab you and drag you into the van. It takes seconds. He’s had plenty of practice—in San Jose he worked for one of the Sureño gangs. You won’t even have time to scream before Francis shuts the van door.

You’ll know who they work for. Warner doesn’t target bystanders. They’re here because you stole from her, or lied to her, or informed on her. Or maybe you didn’t pay your tab at one of her businesses. An underground casino, a bordello, a drug den.

They’ll ask you questions. The first few are a test; they already know the answers. If you lie, Francis will hold you down, while Sariklis forces a water bottle into your mouth and pinches your nose shut so it feels like drowning. They do it like that because they’re still in the parking lot. There aren’t many quiet ways to torture someone.

Just when it feels like you’re gonna die, Sariklis will take the bottle out. You’ll throw up. Then Sariklis will ask you some more questions. The real ones. Whatever Warner needs to know. Who have you told? What are their names? Where do they live? Show us the messages.

The final question is always about the PIN for your bank account. You’ll answer that one gladly. You’ll think it means they only want money. You’ll think they’re going to let you go.

After you give them your PIN, Sariklis will stick the bottle back in your mouth. This time he won’t let up. He’ll drown you, right there in the parking lot. Three minutes until your heart gives up, four until brain death.

Francis will stay in the van with your body while Sariklis takes your car, your phone and your wallet to an ATM. He’ll withdraw as much as he can, then drive to a secluded stretch of beach in Galveston.

There he’ll meet Tyrrell, who has your shoes. Sariklis will place your shoes side by side on the sand, your wallet and keys tucked inside like frightened mice. Tyrrell will do a factory reset on your phone, switch it off and hurl it into the sea. They’ll abandon your car on the side of the road, within sight of the gray ocean, and take Tyrrell’s car back to Warner’s office to give her the cash.

I’ve only been to Warner’s office once, and I had a bag on my head for the whole journey. But I was memorizing the turns, and counting the seconds. Afterward, I got them to drop me off someplace else, and I memorized that journey, too. Later I looked at a map and narrowed it down to four city blocks near Market Square Park.

They usually take you on a Friday. If you live alone, you may not be reported missing until Monday. The police will find your car and shoes around Wednesday. Some of them will say you drowned accidentally while swimming. Others will suggest that it was suicide. The shoes are too classy for a normal swim, they’ll say, and there’s no towel. Plus, your bathing suit is still at your home.

Because of the ATM withdrawal, still, others will say that you faked your death. You did have some powerful enemies, after all. Your missing phone lends credence to this theory. But anyone who suspects Warner will be smart enough not to say so.

All this is assuming you’re one of the lucky ones, and Warner doesn’t want the credit for your death. Sometimes she kills someone to send a message. No stolen shoes, no water bottle. The body turns up in dozens of pieces, each removed from a living person.

Once upon a time, Warner’s men would have just thrown your body into the ocean. The water in your lungs would make sense on the autopsy report. But the bruising around your lips and wrists, plus the damage to your gums, might raise some eyebrows. Now they have a better way.

While Sariklis and Tyrrell bring the cash to Warner’s office, Francis will take the van onto State Highway 12, alone. Your body will be in the back under a sheet, slowly going cold. Francis will drive through the dark, watching the buildings disappear and the trees get taller and taller.

Then he’ll see a beat-up Toyota Corolla parked on the shoulder, miles from anywhere. He’ll pull over. Despite what he’s seen and done, he’ll shudder before he gets out of the car.

Then he’ll slide open the van door, and give your body to me.

6 thoughts on “Just One Bite by Jack Heath *BLOG TOUR WITH EXCERPT* OUT JUNE 4th!”