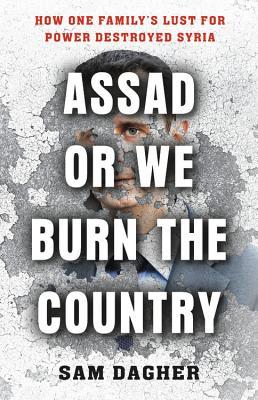 From a Pulitzer Prize-nominated journalist specializing in the Middle East, this groundbreaking account of the Syrian Civil War reveals the never-before-published true story of a 21st-century humanitarian disaster.

Finally a real account of what is going on in Syria! And from a Pulitzer Prize-nominated journalist who specializes in the Middle East. A never before heard boots on the ground look at the Syrian Civil War that is killing the country.

In 2011, President Bashar al-Assad, decided to address the Arab Spring-type protests in Syria with crushing violence on his own people. There would be no uprising here. Instead, there would be a long war that so far has killed almost 500,000 and as citizens flee, terrorist groups came in and suddenly we had an enormous refugee issue. His response went against the advice of his friend Manaf Tlass, commander of the army.

Dagher uses his own observations and experiences in Damascus and has interviewed many on both sides of this war. Including Tlass. Everything he says rings true. The campaign waged by Basheer has turned the country and the entire region into chaos.

This book could not be more timely. Dagher has shown us what evil looks like and how easily it can be ignored by the world. There is so much false information out there and this book clears it all up very nicely.

Keep bringing us the truth and great journalism!