A BIDDER END by ELLERY ADAMS and PARKER RIGGS 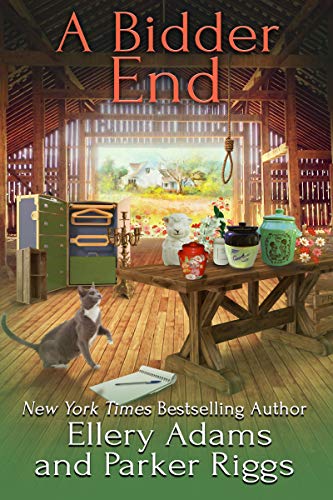 In the world of antiques and collectibles, it helps to have a sharp eye for quality, a good ear for gossip, and a nose for murder.

Molly Appleby is back at work writing for the Collector’s Weekly. Up first, an auction of antiques from a retired actor whose young new wife doesn’t want to live with old things in her house, well except for said rich husband.

Molly is thrilled her friend was chosen to host the auction. It would really boost his name recognition and hopefully make a boatload of money for his business. And it doesn’t hurt that he is dating the actors secretary.

As Molly covers the auction she is taking in not only the antiques but some pretty odd behavior from some of the players.

Molly has a nose for antiques and odd behavior and when her friend turns up dead even the police know she is going to dig as deep as she has to in order to prove it was murder.

There were so many shady characters hiding in plain sight in this first of a new series. It was hard to narrow down who had the best motive. And the more she digs the more she finds out her friend wasn’t the nice guy she thought. When the killer begins targeting Molly she digs her feet in harder. But who would want Molly dead? Or is someone playing cat and mouse with her?

I am thrilled to see this new series. The characters were smart and believable, the plot could have been pulled from the headlines and it all came together perfectly. As a good cozy should!

NetGalley Beyond The Page Publishing