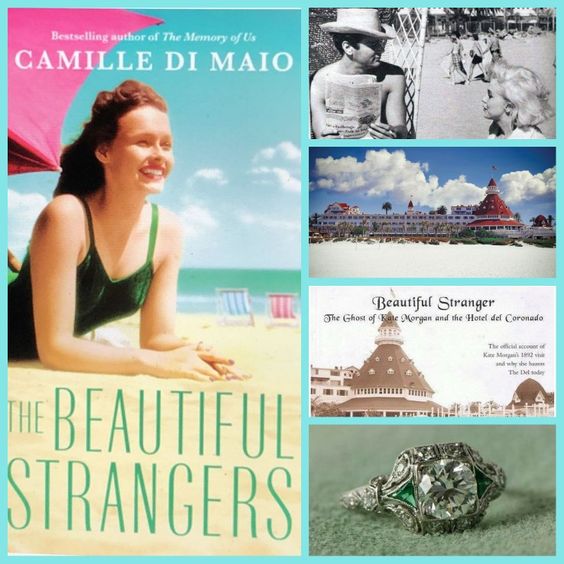 A legendary hotel on the Pacific becomes a haven where dreams, love, and a beguiling mystery come alive.

It is 1958 and Kate Morgan wants more than serving fish in the family restaurant in San Francisco. She has dreams of Southern California and the movie business. Her grandfather, whose memory is shaky at best is adamant she must go to the famous Hotel Del Coronado and find the beautiful stranger.

Kate grabs her chance to get even a temporary job at the resort. And immediately finds out that she isn’t the only Kate Morgan there.

Told from the points of view of the ghostly Kate Morgan and the current day Kate Morgan, the former having never left, tethered to the place of her death.

Kate loves everything about the hotel including the stars filming Some Like It Hot. Kate has to pinch herself when she is asked to bring Miss Monroe her breakfast every day and get her to the set on time. And when she isn’t coaxing Miss Monroe to eat or get to work, she’s trying to find the beautiful stranger for her grandfather. Only then can she go home.

Ms. Di Maio has done a masterful job of seamlessly weaving the past with the present as well as the fiction with the truth. Yes Kate Morgan was a real woman who died a tragic death at the hotel. Guests claim to have seen her and she sees everything and everyone grow up and grow old as she remains as she was in life. But Kate has a secret too and the author has gathered all of the threads of this story and turned them into a compulsively readable tale.

Camille recently left an award-winning real estate career in San Antonio to become a full-time writer. Along with her husband of 21 years, she home schools their four children. She has a bucket list that is never-ending, and uses her adventures to inspire her writing. She’s lived in Texas, Colorado, Pennsylvania, Virginia, and California, and spends enough time in Hawai’i to feel like a local. She’s traveled to four continents (so far), and met Mother Teresa and Pope John Paul II. She just about fainted when she had a chance to meet her musical idol, Paul McCartney, too. Camille studied political science in college, but found working on actual campaigns much more fun. She overdoses on goodies at farmers markets (justifying them by her support for local bakeries), and belts out Broadway tunes whenever the moment strikes. There’s almost nothing she wouldn’t try, so long as it doesn’t involve heights, roller skates, or anything illegal. “The Memory of Us” is Camille’s debut novel, her second book “Before the Rain Falls” released in 2017, and her third, “The Way of Beauty”, came out in 2018. Her next book, “The Beautiful Strangers” will be available spring 2019.