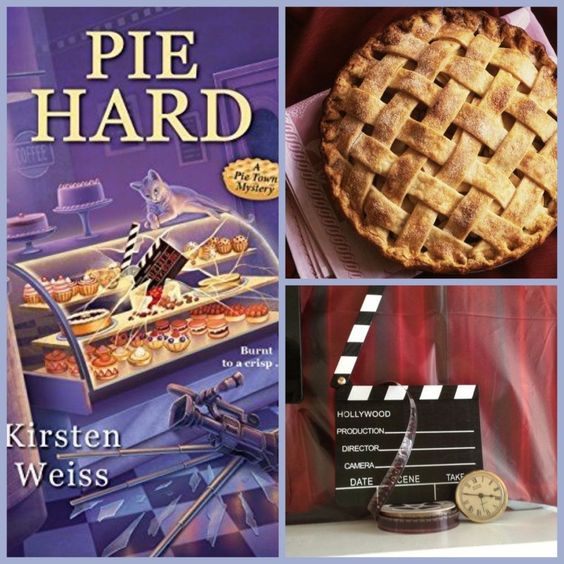 At Pie Town, Val Harris is still in her first year and while business is a little slow right now she isn’t about to throw in the towel.

Unbeknownst to Val her much older pie crust baker, Charlene has signed the shop up for the reality television show Pie Hard. Walking into her shop to find strangers and cameras is not what Val needs at the moment. But with Charlene whispering in her ear listing all of the good things and publicity they would receive, she caves.

Pie Hard, like all reality shows, thrives on drama and trust me there is no lack of drama in this tale. Rude, late, and pushy, Val doesn’t know how much of this she can take. Charlene has already forgotten to tell her she rented a piece of the land where Val’s tiny house sits to a group of Yurt loving, goddesses for the week and she still isn’t sure if she has a boyfriend or not.

When one  of her gaming regulars, Ray calls to say he just saw a body fall off the cliff at the hotel where the entire crew is staying, Val and Charlene are on the case. Val is hoping they all just go on home, but no, fate has something even more shocking in store for her! The new producer.

When even more bodies start piling up they know they need to solve this thing before Pie Town dies a hard death!

What makes a really good Cozy Mystery Series? Characters. And Ms. Weiss has given us an abundance of them. Not the typical ditzy ones. Characters you could meet in any small town. They have depth, flaws, quirks, just like the rest of us. They are relatable. This is what I like to call an intelligent cozy. There are so many layers of intrigue in this one that I read it straight through! Just when you think you know who did what and why, you don’t. I love it when I read a story and go WHAT?? at the wrap up.

Thanks so much for the ARC KW!