THE HOUR OF DEATH by JANE WILLAN 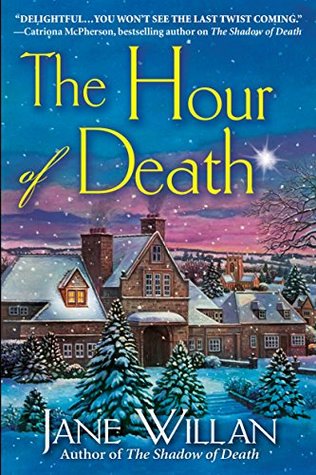 The second in the series finds us back at Gwenafwy Abbey, in the village of Pryderi, with Sister Agatha and Father Selwyn.

Christmas is almost here and things are in full swing at the Abbey as well as in the village. There is an enormous call for the cheese the Abbey sells and at the church preparations are underway for an art show as well as the Christmas Cantata.

When the president of the Village Art Society turns up dead in the parish hall, Sister Agatha jumps in with both feet. Even though the police aren’t investigating this as a murder, the good sister and her willing partner, Father Selwyn put their heads together to figure out who wanted the lady dead. Trouble is there seems to be quite a few folks who couldn’t stand her or her so-called talent.

Will Christmas find our favorite sleuthing nun on the naughty list? Or will she uncover who the guilty party is first?  There is always more than one thing going on in this series. What do they really know about their new tenant? For that matter how well do they know anyone?

This is a lovely series and I’m a big fan of the characters. Sister Agatha has her own unique way of investigating. A bit scattered and a bit unconventional for a nun but it works well in my opinion.

3 responses to “THE HOUR OF DEATH by JANE WILLAN”