THE GUILTY DEAD by P.J.Tracy 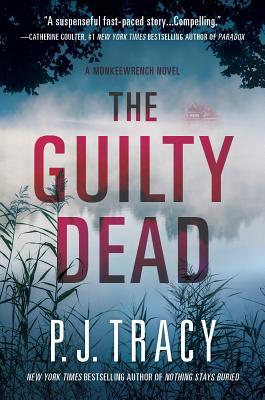 All of our favorite characters are back! And all hell is breaking loose!

Magozzi and Grace are about to have a new baby any day now. and Monkeewrench has come up with new software to track possible terror threats. Things are humming along and then they are going at a break neck speed to find a killer and maybe a terrorist cell.

Last year Gregory Norwood, wealthy businessman and famous in Minnesota, lost his only son Trey to a heroin overdose. Or so the police say. But Gregory doesn’t believe it. Months before the anniversary of his death, Gregory hires a PI to investigate. But on the anniversary, Gregory is found dead, an apparent suicide.

But Magozzi and Gino aren’t quite sure how that would work since the man used his right hand to pull the trigger when he is left-handed. Their digging uncovers more questions than answers and when a second body is discovered, things get crazy.

As Grace and Harley and Crew are working with the Feds to try out their new software the first hit they get is chatter about City Hall. And outside the bodies keep piling up. But are they related to Norwood’s death or the terror threat?

In a race against time they will all have to work together to make sure they stay alive and find the truth.

Reading P.J.Tracy is like going on a roller coaster ride! Twists, turns, round and round and she still manages to give us rich characters and a great story!

This is the first book out with just P.J., following her mother’s death in 2016 and I think she would be very proud of this one! I for one am looking forward to the next one!

5 responses to “THE GUILTY DEAD by P.J.Tracy”