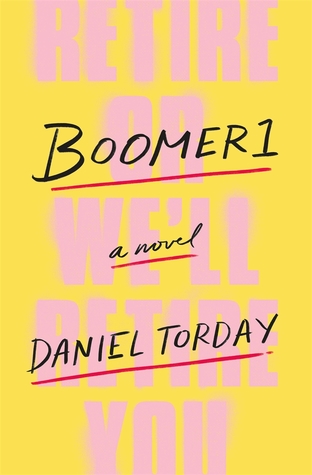 Bluegrass musician, former journalist and editor, and now PhD in English, Mark Brumfeld has arrived at his thirties with significant debt and no steady prospects. His girlfriend Cassie—a punk bassist in an all-female band, who fled her Midwestern childhood for a new identity—finds work at a “new media” company. When Cassie refuses his marriage proposal, Mark leaves New York and returns to the basement of his childhood home in the Baltimore suburbs.

Desperate and humiliated, Mark begins to post a series of online video monologues that critique Baby Boomers and their powerful hold on the job market. But as his videos go viral, and while Cassie starts to build her career, Mark loses control of what he began—with consequences that ensnare them in a matter of national security.

Told through the perspectives of Mark, Cassie, and Mark’s mother, Julia, a child of the ’60s whose life is more conventional than she ever imagined, Boomer1 is timely, suspenseful, and in every line alert to the siren song of endless opportunity that beckons and beguiles all of us.

I enjoyed the premise of this book. Why are so many millennials moving home and not being able to find jobs? Why are these people so angry at baby boomers?

Told through the eyes of Mark,Cassie and Mark’s mother we have voices of all generations.

One thing that bothered me was the huge words over and over again. Not necessary. I felt like a lot of this should have been edited better as Mark comes off as out of touch and entitled. Cassie is more go with the flow and Julia certainly doesn’t want her adult son living down in her basement making videos that have her being followed by the Feds.

While I can understand the angst of not being able to find a job, what exactly did he expect to do with a liberal arts degree, if not teach. He says there are no jobs. While right here where I live they are begging for teachers.

Unfortunately not every book clicks with a reader and this one had so many 6 syllable words that it just felt off. They didn’t mesh with the story well.

2 responses to “BOOMER1 by Daniel Torday”