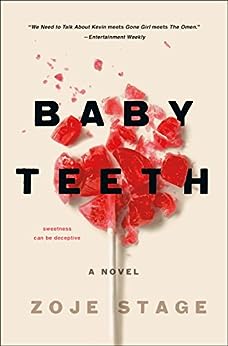 “Now that she knew the name of the game – Scare Mommy – she should be able to defend herself. But goosebumps rose on her skin, even under the heat of the water, when she thought about her creepy daughter. The whites of her eyes. Her ability to sneak up on her as she slept.”

She’s the sweet-but-silent angel in the adoring eyes of her Daddy. He’s the only person who understands her, and all Hanna wants is to live happily ever after with him. But Mommy stands in her way, and she’ll try any trick she can think of to get rid of her. Ideally for good.

She loves her daughter, really, but after years of expulsions and strained home schooling, her precarious health and sanity are weakening day by day. As Hanna’s tricks become increasingly sophisticated, and Suzette’s husband remains blind to the failing family dynamics, Suzette starts to fear that there’s something seriously wrong, and that maybe home isn’t the best place for their baby girl after all.

You know that horribly creepy feeling you get when you wake up and one of your children is right there staring at you? Yes, that one. That is how Suzette feels every second of every day.

Hanna doesn’t speak. She can speak. But she won’t speak. Until she decides to, but only as a dead french witch and only to her mother and the things she says would have me dropping her off at the nearest mental hospital.

Books with children as the evil ones scare the living daylights out of me. Remember Children of the Corn?  Well this is one that will have you sleeping with one eye open!