from the corner of the oval by Beck Dorey-Stein 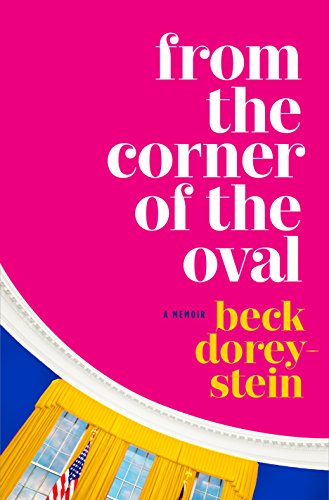 The compulsively readable, behind-the-scenes memoir that takes readers inside the Obama White House, through the eyes of a young staffer learning the ropes, falling in love, and finding her place in the world. (Blurb)

In 2012, Beck Dorey-Stein is working five part-time jobs and just scraping by when a posting on Craigslist lands her, improbably, in the Oval Office as one of Barack Obama’s stenographers. The ultimate D.C. outsider, she joins the elite team who accompany the president wherever he goes, recorder and mic in hand. On whirlwind trips across time zones, Beck forges friendships with a dynamic group of fellow travelers—young men and women who, like her, leave their real lives behind to hop aboard Air Force One in service of the president.

As she learns to navigate White House protocols and more than once runs afoul of the hierarchy, Beck becomes romantically entangled with a consummate D.C. insider, and suddenly the political becomes all too personal.

Against the backdrop of glamour, drama, and intrigue, this is the story of a young woman making unlikely friendships, getting her heart-broken, learning what truly matters, and, in the process, discovering her voice.

I wanted to read this book because of the behind the scenes look at Obama and what goes on during all of that travel.

While it began strongly, Beck gets caught up in the trap of drinking with and sleeping with her co-workers. I’m not sure how she got anything done as drunk as she always is and not really picky about who she is sleeping with.

We got a few interesting glimpses of Obama and other staff members, but it was all overshadowed by her almost teen-aged angst and sleeping with men already in relationships. It could have been something with some heavy editing.

So no, I wouldn’t recommend this one.