THE LOST LOVE LETTERS OF HENRI FOURNIER by Rosalind Brackenbury 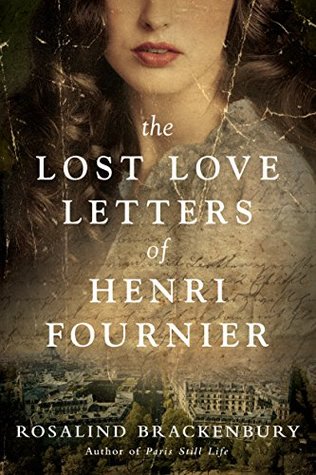 What do you do when you’ve lost the love of your life?

Seb Fowler has arrived in Paris to research his literary idol, Henri Fournier. It begins with an interview granted by a woman whose affair with the celebrated writer trails back to World War I. The enchanting Pauline is fragile, but her memories are alive—those of an illicit passion, of the chances she took and never regretted, and of the twists of fate that defined her unforgettable love story.

Through Pauline’s love letters, her secrets, and a lost Fournier manuscript, Seb will come to learn so much more—about Pauline, Henri, and himself. For Seb, every moment of Pauline’s past proves to be more inspiring than he could have imagined. She’s given him the courage to grab hold of whatever life offers, to cherish each risk, and to pursue love in his life.

Intimately epic, The Lost Love Letters of Henri Fournier spans generations to explore every beautiful mystery of falling in love, being in love, and losing a love—and, most important, daring to love again and discovering just how resilient the human heart can be.

Little did Sebastian know that first interview with Pauline in 1975, would send him on a journey, to write his book, to fall in love and then lose her before going back to where it began. Only this time Pauline is long gone and what is left are Henri’s family.

And more lost letters and another unpublished story. And within a few weeks he is planning on selling his own home and living with the last of the family.

This is the story of a very young man, having an affair with a very married woman as well as being an actress of some fame. Henri’ is young and impressionable and full of energy and writes a beautiful book before war comes calling and Henri will not be returning.

The problem for me was the love letters. Really there wasn’t a lot told about exactly what was in them. Every thought each character had been written down and it slowed the pace significantly enough that I got bored and didn’t really care about any of them. They were all rather superficial and hard to care about. Even though they did exist. Pauline and Henri. And his body was found and returned home. The unpublished work never published but the originals were by their descendants.

I would not read it again.