Survival of the Fritters by Ginger Bolton 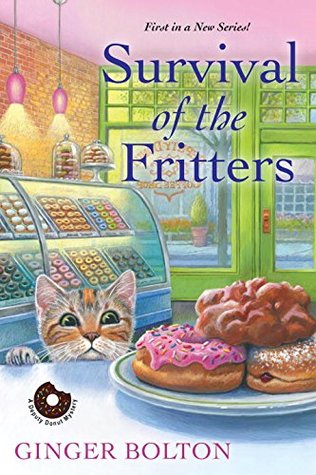 A Deputy Donut Mystery #1  First in a Series

Emily Westhill runs the best donut shop in Fallingbrook, Wisconsin, alongside her retired police chief father-in-law and her tabby Deputy Donut. But after murder claims a favorite customer, Emily can’t rely on a sidekick to solve the crime—or stay alive.

Emily, a former 911 operator, loves owning her own donut business with her father-in-law, retired Chief of Police. After the death of her husband, she left her 911 job and opened a donut shop named for her Tabby, Dep. things are progressing well when one of Emily’s regular customers, Georgia, fails to show up for her Knitters group her friends are worried and so is Emily. When they go to check on her they find her dead in her home surrounded by stale donuts.

By coincidence maybe, Georgia’s son was murdered just 5 years ago and his killer has never been found. Along with her new neighbor and friend, she investigates on her own to prove neither she nor Lois could have done this.

With clues that make no sense, this could be the end of their partnership and the end of them, if they don’t find out who the killer is.

Emily and her father-in-law are really good characters. Fallingbrook is full of interesting people and some shady characters. This is a really good beginning of a new series and I hope we will see more soon! Oh and and there are recipes in the back! Even a penuche one!

8 responses to “Survival of the Fritters by Ginger Bolton”