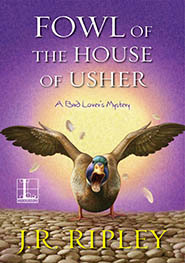 It really is the dead of winter in Ruby Lake when a party becomes an invitation to murder for Birds & Bees owner Amy Simms . . .

No one ruffles Amy’s feathers like Craig “The Gigolo” Bigelow. Not only has the two-timer returned to town, but his new girlfriend has invited Amy to a dinner party. And at Usher House of all places—legendary home to ghosts, freak accidents, and now, most horrifying of all, an ex-boyfriend and his fiancé. Regrettably, there are also sick ducks on the property that need attention. For a bird lover like Amy, it’s fowl before pride.

When everyone becomes snowbound, Amy can’t imagine the evening getting worse. Until a guest is found with a carving knife stuck in his chest. And he’s not the first to call it a night. Now Amy’s got till dawn to go hunting for a killer—before someone else ends up a dead duck . . .

This is the 7th in the Bird Lover’s Mystery Series by Mr. Ripley and I can honestly say they just keep getting better!

Craig is back and with a sweet little thing on his arm. With Paul away on vacation, Craig has rented a house outside of Ruby Lake to oversee things until Paul returns. Knowing he won’t be allowed to stay in Paul’s apartment in Amy’s house with this little chippy on his arm.

When Amy is invited to come to dinner at a supposedly haunted mansion, she is adamant about not attending. Until Craig brings up the wood ducks that look sick. Amy is a sucker for a bird in need and if Amy has to go, well, Kim is going as well. But when they find one of the snowed in guests with a knife in his chest, it turns into fouled up mess!

This has been my favorite book in the series. Amy is growing, standing her ground more and becoming someone I like very much. With new shady characters thrown in, it’s more of a game of Who’s Next than Who Done It! And this one kept me guessing as long as it took our Amy!

I love the setting. Winter, snowstorm, trapped in a haunted house with a dead body, it was perfect!

Once again, Mr. Ripley, you have done an outstanding job!

12 thoughts on “Fowl of the House of Usher by J.R.Ripley”