THE SIXTH DAY~A BRIT IN THE FBI THRILLER by CATHERINE COULTER AND J.T.ELLISON 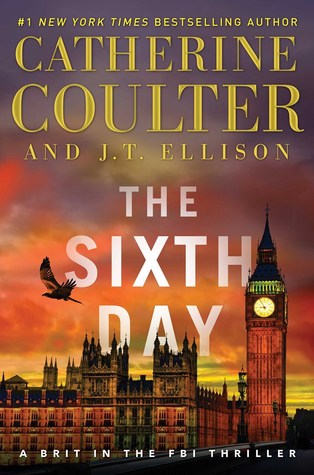 Special agents Nicholas Drummond and Michaela Caine take on a ruthless mastermind in the fifth highly anticipated thriller in the New York Times bestselling A Brit in the FBI series.

When several major political figures die mysteriously, officials declare the deaths are from natural causes. Then the German Vice-Chancellor dies on the steps of 10 Downing Street, and a drone is spotted hovering over the scene. The truth becomes clear—these high-profile deaths are well-constructed assassinations, and the Covert Eyes team is tasked to investigate.

What do you get when you combine Coulter and Ellison? A fast paced, nail biter of a thriller!

Someone has hacked the computers of the highest levels of government. How could something like this happen? They all use the most sophisticated and impenetrable programs and firewalls. All from the same company. Could the hacks be done by a disgruntled employee or are they being infiltrated by the very person who designed the system?

Along with a mysterious book of unknown language that has at the forefront twins descended from Vlad himself. Bodies are piling up, key government officials killed in full view of the public and no one saw a thing. Other bodies are showing up having been bled dry. For What?

This was everything and more I have come to expect from these authors. Very good collaboration!

11 responses to “THE SIXTH DAY~A BRIT IN THE FBI THRILLER by CATHERINE COULTER AND J.T.ELLISON”