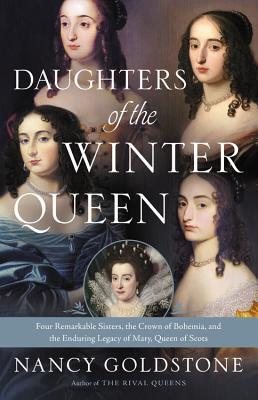 Daughters of the Winter Queen: Four Remarkable Sisters, the Crown of Bohemia, and the Enduring Legacy of Mary, Queen of Scots.

From the author of The Rival Queens, a lively group biography of Elizabeth Stuart, the Winter Queen, and her four daughters, whose lives paint a vivid picture of the upheavals of 17th-century Europe

Set in the tumultuous seventeenth century, DAUGHTERS OF THE WINTER QUEEN tells the delicious and dramatic stories of Elizabeth Stuart, the Winter Queen–granddaughter of the doomed Mary, Queen of Scots–and her four unforgettable daughters.

This is the story of Elizabeth who would marry a man who became the King of Bohemia. While she gave birth to 13 children these four girls were the only ones to make it to adults. The story focuses mainly on Elizabeth until her death when more about the daughters is revealed.

Starting out in Scotland and England the author takes us to the palaces of Europe and is full of details on the wars, all the political messiness, love affairs doomed to fail,betrayals and murder even.

The daughters were individuals with unique talents. Elizabeth, the scholar, Louise was an artist, Sophia was a writer and Henrietta, well, she was a beauty. Two of the girls will become abbesses, heads of convents, never marrying. One sadly died young and the other went on to almost become the Queen of England, when her son became King George I.

Goldstone tells this story with an ease that even a novice history reader will be able to understand. I would say the book is heavy on Elizabeth until she dies, so I would have liked to have seen more about the daughters. But this story of love, loss, tragedy and triumph was one I thouroughly enjoyed.

I really enjoyed this book and if you are a Tudor lover, you must read this one!

6 thoughts on “Daughters of the Winter Queen by Nancy Goldstone”