The Man Who Caught The Storm by Brantley Hargrove 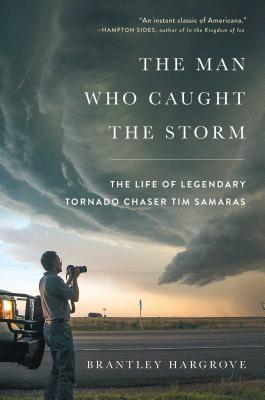 A tale of obsession and daring. A contest between humankind and nature’s fiercest phenomenon. The saga of the greatest storm chaser who ever lived.

At the turn of the twenty-first century, the tornado was one of the last true mysteries of the modern world. It was a monster that ravaged the American heartland a thousand times each year, yet science’s every effort to divine its inner workings had ended in failure. Researchers all but gave up, until the arrival of an outsider.

In a field of PhDs, Tim Samaras didn’t attend a day of college in his life. He chased storms with brilliant tools of his own invention and pushed closer to the tornado than anyone else ever dared. When he achieved what meteorologists had deemed impossible, it was as if he had snatched the fire of the gods. Yet even as he transformed the field, Samaras kept on pushing. As his ambitions grew, so did the risks. And when he finally met his match—in a faceoff against the largest tornado ever recorded—it upended everything he thought he knew.

Brantley Hargrove delivers a masterful tale, chronicling the life of Tim Samaras in all its triumph and tragedy. He takes readers inside the thrill of the chase, the captivating science of tornadoes, and the remarkable character of a man who walked the line between life and death in pursuit of knowledge. Following the tradition of Into Thin Air and The Perfect Storm, Hargrove’s debut offers an unforgettable exploration of obsession and the extremes of the natural world.

Storm Chasers are some of my favorite people. Living in Oklahoma City area we see the cars and trucks with all of the equipment on the roof every day. I live with one and I remember the day that Tim died.

We were worried sick as our family home is in El Reno/Union City took shelter and there was nothing we could do but wait. Over the scanners we heard they had found Tim’s car and at first we thought he was the only one killed, but no.

Tornadoes are one of Mother Nature’s most mysterious creations. The power, the unpredictability, there seems to be no pattern to them at all. Why they demolish the town of Moore almost every few years and then there will be one untouched home in the middle. It isn’t logical and yet we are mesmerized by them. We want to know how they work.

Great strides have been made in early warning systems, but it’s still not enough.

This was a hard book to read and yet it was a beautiful testament to a man who lived life on his own terms. We will forever miss them all.