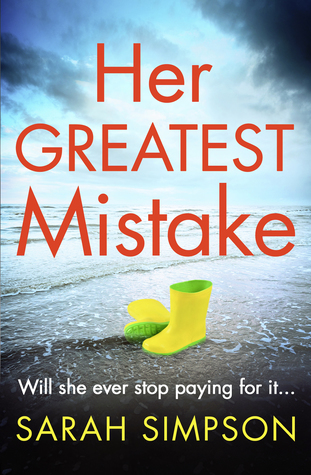 DO WE EVER KNOW WHAT GOES ON BEHIND CLOSED DOORS?

Eve and Gregg were the perfect couple, with the perfect marriage… which has become the perfect lie. Gone is the charming, attentive Gregg – instead Eve wakes up each morning beside a manipulative and sinister man who controls his wife’s every move.

So Eve flees her immaculate marital home to keep herself, and young son Jack safe. Yet no matter how careful she has been, she knows Gregg will be relentless in his pursuit of his missing family. And that one day, when she’s least expecting it, he will find them…

What was Eve’s greatest mistake?

Marrying Gregg? Leaving him? Or leaving him alive…?

HER GREATEST MISTAKE is the gripping debut which will keep you guessing until the very last page. BA Paris meets Liane Moriarty in this electrifying thriller.

After a good, eerie beginning, this book unfortunately settled in to the poor clueless wife who marries the perfect man who becomes abusive and cruel.

This is nothing like a Liane Moriarty book.  The style of writing was odd and didn’t flow well for me. It was too wordy and it felt like the author was trying too hard.

One of my biggest peeves is when a book is compared to other writers works. Come on, this isn’t close to Moriarty.

And I would really like to see this template of supposedly smart women marrying evil, crazy men and just becoming simpering, helpless victims. It’s a template that has been overused and just feels insulting to the reader.

Thanks NetGalley/ April 1st 2018 by Head of Zeus, Aria

6 thoughts on “Her GREATEST MISTAKE by SARAH SIMPSON”