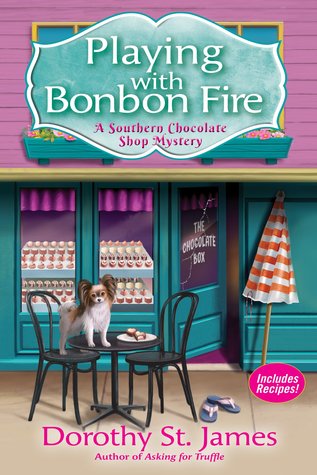 Chocoholic Charity Penn must smoke out the killer to stop her newly inherited beachside chocolate shop from going up in flames in Dorothy St. James’ decadent follow-up to Asking for Truffle.

Chocolate shop owner Charity Penn is finally settling into life in the quirky South Carolina seaside town of Camellia Beach cooking up chocolate treats. She’s even helped organize the town’s lively beach music festival which has brought rollicking crowds eager to dance the Carolina shag. That is, until one of the band’s lead singers is found dead beside a beach bonfire.

While also trying to balance the amorous attention of music star Bixby Lewis, in town for the festival, and her quest to perfect a new hot flavored bonbon, Charity dives into the investigation. Though it’s more spice than sugar when she discovers a threatening note, comes across decades of age-old secrets, and Bixby comes into the line of fire when a gas grill explodes on the deck of a beachfront house.

Now Charity must turn up the heat and catch the killer before her chance melts away in Playing With Bonbon Fire, the delightful second Chocolate Shop mystery served up just right for fans of JoAnna Carl and Joanne Fluke.

The second installment of the Southern Chocolate Shop Mysteries has Penn trying to continue her Grandmother’s business, The Chocolate Box. Known for their decadent chocolate bonbons. As hard as she tries it’s just not coming easy to her.
But with her partner Bertie doing most of the creating in the kitchen, Penn has free time to plan a music festival on the island featuring local talent as well as a famous rock star. Much like her fledgling efforts to create mouth-watering bonbons, things aren’t going as planned!
When more than wood goes in the bonfire, she finds herself being targeted by a killer. Or is it someone close to her? When her half-sister flies into town to find out what is going on, they both get to work trying to solve the murder as well as trying to find what happened to Penn’s mother. Which is a continuing story line within the series.
This tale brought back so many happy memories playing on the islands around Charleston. My mother and her sister winning prizes for the Shag! Any time a book brings a smile to my face, it’s a good read!
Netgalley/Crooked Lane Books   March 13, 2018