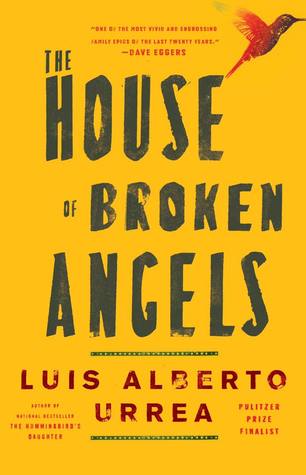 The definitive Mexican-American immigrant story, at once intimate and epic, from an acclaimed storyteller.

In his final days, beloved and ailing patriarch Miguel Angel De La Cruz, known affectionately as Big Angel, has summoned his entire clan for one last legendary birthday party. But as the party approaches, his mother, nearly one hundred, dies herself, leading to a farewell doubleheader.

Across one bittersweet weekend in their San Diego neighborhood, the revelers mingle among the palm trees and cacti, celebrating the lives of Big Angel and his mother, and recounting the many tales that have passed into family lore, the acts both ordinary and heroic that brought them to a fraught and sublime country and allowed them to flourish in the land they have come to call home. The story of the De La Cruzes is the American story. This indelible portrait of a complex family reminds us of what it means to be the first generation and to live two lives across one border. Teeming with brilliance and humor, authentic at every turn, The House of Broken Angels is Luis Alberto Urrea at his best, and it cements his reputation as a storyteller of the first rank.

Big Angel doesn’t have much time. Cancer is eating away at him as he buries his mother and prepares for his own death.

An eye-opening look at life on the border of two very different cultures. A passionate story of family, life, love and loss and the regret of things done, as well as not done in one’s life. Told from several viewpoints, it was easy to follow and so well written I didn’t want it to end. I wanted to know more about this Mexican-American family and what would become of each and every one of them.

Luis Alberto Urrea is the award-winning author of 13 books, including The Hummingbird’s Daughter, The Devil’s Highway and Into the Beautiful North (May 2009). Born in Tijuana to a Mexican father and American mother, Luis has used the theme of borders, immigration and search for love and belonging throughout his work. A Pulitzer Prize finalist in 2005 (nonfiction), he’s won the Kiriyama Prize (2006), the Lannan Award (2002), an American Book Award (1999) and was named to the Latino Literary Hall of Fame. He is a creative writing professor at the University of Illinois-Chicago and lives with his family in the ‘burbs (dreaming of returning West soon!).

NetGalley/Little,Brown & Co.    Release is set for March 06, 2018 And there is a book giveaway on Goodreads!