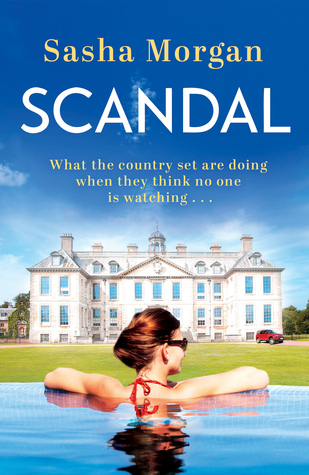 As the new custodian of the ancestral home, Treweham Hall, Tobias Cavendish-Blake soon discovers exactly what he’s inherited. Instant financial action is needed if the Hall is to survive the mounting debts it’s racking up. Adding insult to injury the family is forced to sell the Gate House on the estate to lottery winners Gary and Tracy Belcher – not the kind of neighbours Tobias was hoping for.

Megan Taylor inherits her grandmother’s country cottage in the village of Treweham and decides to make a fresh start there, taking a job at the local country pub.

When Megan meets Tobias, the attraction is clear, but she is determined to resist his charms, put off by his reputation and that of his best friends – the rakish Seamus Fox, son of a millionaire race horse trainer and dastardly jockey Dylan Delany. But Tobias is a hard man to resist…

This was a sweet story. The descriptions of the characters and the Cotswolds was very well done.

Megan learns two things. Her boyfriend is an ass and her Grandmother has died, leaving her cottage in the Cotswolds to her. A change of scene is just what she needs. Moving into her Grandmother’s cottage, she gets a job at the local pub, meets her neighbors and gets gobsmacked by the hunky Lord of the manor!

But is it Megan he wants or does she simply remind him of his dead fiancee?

I really enjoyed this story. The setting, the characters. There were some hilarious moments and some sad moments and a really big secret!

I have no problem recommending this book. What I had a problem with was the cover. What was the big Scandal? And who is the blonde? Where is that pool? Please stick another cover on this because it really deserves it! And hopefully we will get to see more of these characters! I can see this being a lovely series!

It was day break. A rosy, warm sunrise glowed over the vall

ey. Galloping through the

orse to survey the

sight before him. Treweham Hall stood proud and majestic agai

hills. The imposing building was made of sandstone with four co

sturdy buttresses that gave it a castle-like appearance. Gothi

glass twinkled in the sunlight. He sighed heavily: would it alway

the fortress of his family?

That seemed dubious, going through the estate accounts. His fa

Richard Cavendish-Blake, had looked after the place well

too well. All the

the upkeep of the Hall. The outgoings far outweighed the incom

ings. The payroll of

the staff alone made Tobias

eyes water, not to mention the colossal energy bills.

Tobias had suggested shutting down the many vast unused rooms, but

t hear of it. Lady Cavendish-Blake had been sheltered by

oney pit and the current

state of affairs could only be described as dire. As the

new custodian, it was down to

Tobias to keep the place running. He was responsible not only for

the staff, but the

village tenants too. Feeling the burden weighing down on his broad

realised it was time to grow up. Time to settle down. The future

goodbye to the wild parties for which he was notorious.

His thoughts turned back to his thirtieth birthday bash, making hi

t been so much a party, more a two-week brawl around Europe

with a few friends,

including his oldest childhood chum, Seamus Fox, son of a m

trainer. The two of them together had been a lethal c

other on, the more daring and outrageous the exploits the

better, resulting in the

occasional brush with the tabloids. The picture of him an

d Seamus plastered over the

legless (and trouserless) with a beauty on each arm, was

t let him. They

the Heir and the Fox

t a natural wild child, the opposite in fact.

His one true love, Carrie, had been a local girl from t

been close. Even when he had been sent to Eton they

constantly made arrangements to meet. When Tobias had tur

ned twenty-one he had

proposed, claiming she was the only thing he wanted. Both families

with the arrangement. Carrie

s parents were glad that being married to Tobias meant

parents were just plain relieved he wanted to settle down wit

local girl, instead of turning to drink and drugs like so many of hi

s peers. Then one

arrie had been hit by a drunken

driver and killed instantly. Tobias had been inconsolable; no

t even the Fox could calm

him. He turned his back on society and locked himself away, refus

ing to talk or open

up to anyone. His mother had been sick with worry, every a

ttempt to reach him futile.

Then, as if overnight, he completely changed. After twelv

Tobias stopped being angry with the world and everyone in it

and decided to rip the

hell out of it instead. He forced himself to live life to the

his considerable allowance on any substance necessary to ge

t the highs he craved, not

to mention a string of stunning girlfriends who were more th

an happy to be

showcased on the arm of a lord