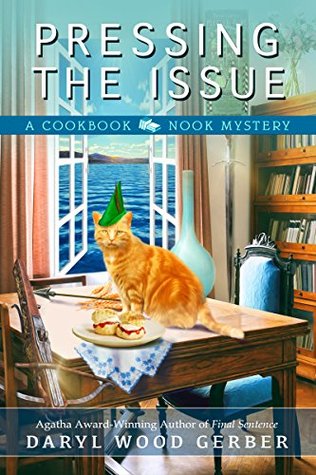 The Agatha Award–winning author of Grilling the Subject returns to the Cookbook Nook in Crystal Cove, where the annual Renaissance Fair serves up a helping of crafty courtiers, damsels in distress, and medieval murder . . .

As the annual Renaissance Fair comes to Crystal Cove, Jenna Hart’s Cookbook Nook is packed with tasty treats and all things medieval, while her pal Bailey is ready to swoon over her upcoming nuptials at a local vineyard. But when the two friends discover the body of the vineyard’s owner bludgeoned by a winepress, all their merriment fades, along with their hopes for a vintage year.

Which churlish varlet did the deed? Was it the victim’s errant brother, who stood to inherit the vineyards? Or the owner’s crestfallen ex-girlfriend? Mayhap it was the newly arrived comely wench, or her jealous husband. Fie on them all! Verily, Jenna can’t rest until justice is served, and she vows to track down the killer. But can she sniff out the truth before the villainous culprit strikes again?

Oh to be in Crystal Cove at the Ren Fair! The entire town gets into the fun with booths and special faire events. Jenna is busy with her own shop as well as helping Bailey with her wedding which is supposed to take place at Nick’s vineyard.

Love is definitely in the air with more than one couple getting shot with Cupid’s arrow, but some couples aren’t all they appear to be. Could one of them be the killer? There are suspects coming out of the woodwork and everyone is acting oddly, even the cat!

If you haven’t tried this author, please do! The recipes are drool worthy and Crystal Cove is worth dropping in on!

February 20th 2018 by Beyond The Page   NetGalley Review

Daryl also writes stand-alone suspense: DAY OF SECRETS and GIRL ON THE RUN.

Fun tidbit: as an actress, Daryl appeared in “Murder, She Wrote.” She loves to cook, and she has a frisky Goldendoodle named Sparky who keeps her in line!