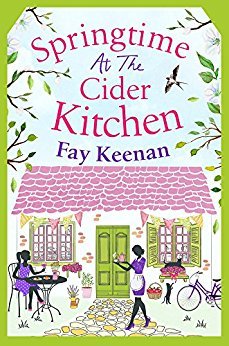 Caroline Hemingway can’t help but feel a little strange watching her ex sister-in-law marrying the owner of Carter’s Cider Farm, but she’s delighted Anna’s found happiness after the death of her late husband, and Caroline’s brother, James. If only Caroline could find her own love story…

Desperate to escape the rat race, Caroline decides to take the plunge and move to the idyllic village of Little Somerby, where she is given the task of opening and running a restaurant in one of the forgotten barns on the Cider Farm.

Opening and running The Cider Kitchen is no easy task, and there are many challenges on the way, but slowly Caroline feels she’s being accepted into the local community, and starts to believe she may have found her forever home. But secrets from her past seem destined to haunt her, and not even the attentions of the very dishy Jonathan Carter can distract her from all she’s left behind…

I had read the first book in the series and had high hopes for the second one.

Caroline is invited to her former sister-in-law’s wedding. Caroline has mixed feelings about it but for Anna and her niece, she comes. Having no intention of staying.

But when an opportunity to use her skills as an event planner pops up, she makes a year commitment to stay and run the new Cider Kitchen.

I found neither Caroline or Jonathan sympathetic characters. There was no romance between them and it seemed to me it was just a few rolls in the hay. And the secrets that Caroline was keeping led to her almost ending up in jail. Where she would have been if this was reality.

However, instead, Jonathan proposes. Where did that come from? And Caroline gets her crime swept under the rug and says yes.

It was very superficial.