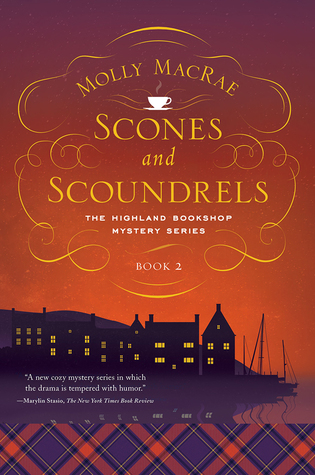 Inversgail, on the west coast of the Scottish Highlands, welcomes home native daughter and best-selling environmental writer Daphne Wood. Known as the icon of ecology, Daphne will spend three months as the author in residence for the Inversgail schools. Janet Marsh and her business partners at Yon Bonnie Books are looking forward to hosting a gala book signing for her. Daphne, who hasn’t set foot in Scotland in thirty years, is . . . eccentric. She lives in the Canadian wilderness, in a cabin she built herself, with only her dog for a companion, and her people skills have developed a few rough-hewn edges. She and the dog (which she insists on bringing with her) cause problems for the school, the library, and the bookshop even before they get to Inversgail. Then, on the misty night they arrive, a young man—an American who’d spent a night in the B above Yon Bonnie Books—is found dead outside a pub.

Daphne did her Inversgail homework and knows that Janet and her partners solved a previous murder. She tries to persuade them to join her in uncovering the killer and the truth. To prove she’s capable, she starts poking and prying. But investigating crimes can be murder, and Daphne ends up dead, poisoned by scones from the tearoom at Yon Bonnie Books. Now, to save the reputation of their business—not to mention the reputation of their scones—Janet and her partners must solve both murders. And Daphne’s dog might be able to help them, if only they can get it to stop howling. . .

Janet and her daughter Tallie have moved to Scotland with a few friends and opened a tea and book shop. In the Highlands. I will admit to this being my dream job!

To get this out-of-the-way, I wasn’t impressed with the blurb. The Tearoom was never under suspicion, nor were the ladies. I would like to see that adjusted in the blurb.

This story had so many characters I almost couldn’t keep track of who was who.
Some of them were developed but most we didn’t really know much about. There were so many suspects and I have to admit I did not see the ending coming!

Daphne was an easy character to dislike and yet she had secrets that in the end made me feel sad for her.

I will probably read the next one too. This is a cozy mystery series that is intelligent, funny and heart warming. And the atmosphere is pretty spectacular in the descriptions of the area.

3 thoughts on “Scones and Scoundrels by Molly MacRae”