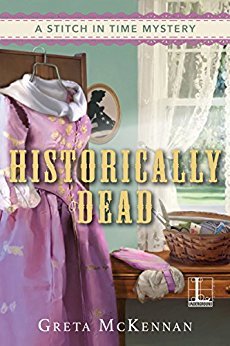 Seamstress Daria Dembrowski must find a historically-minded killer before the fabric of her peaceful town rips wide open . . .

When the reality show My House in History comes to Laurel Springs, Pennsylvania, savvy seamstress Daria Dembrowski sees a business opportunity. The show follows two elderly sisters’ quest to restore their colonial mansion, and that means a heap of work for a seamstress who specializes in historical textiles. Although one of the old women is a bit of a grump, Daria loves the job—until she discovers one of the researchers dead, and the whole project threatens to unwind.

The professor was researching the sisters’ famous ancestor, Revolutionary War legend Samuel Compton, and died after finding evidence that Compton was a traitor. As a series of historical crimes pile up, from a stolen Paul Revere platter to a chilling incident of arson, Daria must find the killer quickly, for her life is hanging by a thread.

This is the second book in the Stitch in Time Mysteries.

When Daria heard about the reality show My House in History, a contest among several homes being restored to their original interiors. Out go the appliances and everything else that isn’t true to the 1770’s.

The house is owned by elderly sisters Ruth and Priscilla Compton, they are the relatives of Revolutionary War hero Samuel Compton. These two women are as different as night and day. One so sweet and docile and one so gruff and suspicious.

Daria herself lives in one of those big,old houses with her brother and roommate. She used to share it with a boyfriend who turned out to be an unsavory character.

However when the professor turns up dead in his office the man himself turns up as an attorney for the show.

What does he want now? What did the professor uncover? There are more than just a few nasty little characters in here. The start of the book I had trouble getting into. And at the end of the book, I still didn’t feel any connection to them.

I like the idea of cozy mystery in a historical setting. All in all I enjoyed learning the history lesson and really enjoyed the ladies.