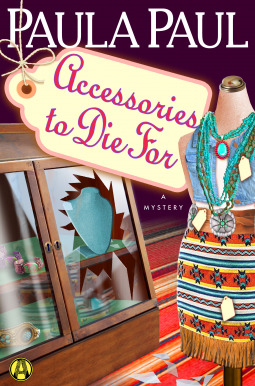 When New York assistant DA Irene Seligman moved home to take care of her demanding mother, Adelle, she thought she was leaving a world of corruption and violence behind. But after opening her store, Irene’s Closet, and getting reacquainted with the locals, she learns that something’s rotten in sunny Santa Fe. Even upstanding citizens like her friend Juanita Calabaza, a Native American artisan, can’t seem to escape the decidedly unfashionable surge in crime.

Juanita’s handcrafted jewelry has been known to catch the eye of many a tourist on the plaza in Santa Fe’s historic district. But lately she’s been attracting the wrong kind of attention . . . from the police. With her son missing after falling in with a bad crowd, Juanita foretells the death of one of his associates—which comes back to haunt her when the scumbag actually turns up dead. Now Juanita’s trading in her turquoise beads for an orange jumpsuit, and Irene will need to call upon all her old investigative skills to clear Juanita’s name—before her friend pays the ultimate price.

I love the cover art on this book. This was my first book by this author.

I finished this book and still couldn’t tell you much about any of the characters. They felt one-dimensional and flat. I could never get a good read on Irene and her mother was a bit over the top.

The ending felt rushed and very violent for a cozy mystery. For me, the character development is key. And that was sadly missing here.

Unfortunately I wouldn’t read it again.