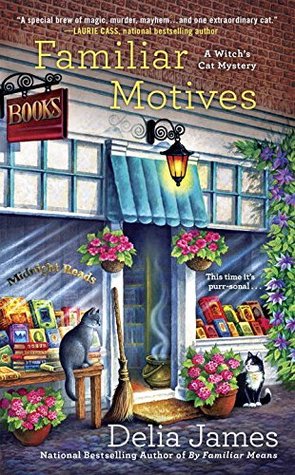 A new witch and her feline familiar get their fifteen minutes of fame in this enchanting mystery in the national bestselling series…
After learning that she comes from a family of witches–and adopting a familiar named Alistair–artist Annabelle Britton has made beautiful Portsmouth, New Hampshire, her home. Together with her coven, this good witch is trying to put a stop to magic and murder most foul.
When Anna takes Alistair to see local veterinarian Ramona Forsythe, they meet the most famous cat in town: Ruby the Attitude Cat, spokes-feline for a pet food brand. But then Ramona turns up dead, and Ruby goes missing. It seems like the murderer used magical means, so it’s up to Anna and Alistair to catch a killer and cat-napper as only a canny cat can.

Anna is still getting used to being a witch and having some skills with her Vibe. And living with Alistair, who disappears at will.

When Anna takes Alistair to the vet, not only does she meet Ruby the Attitude Cat, but she is witness to a strange and scary conversation when a third-party comes crashing into the Vet’s office claiming the cat is hers.

When the vet turns up dead and Ruby gone, Anna and her coven of characters must work to learn if this was an act of magic and a witch was involved or was this all about greed.

The characters are very real, the story runs very smoothly and Alistair steals the show!

A smart new series I’ll check into more!  This one was featured when it came out last month at my library and I quickly grabbed it.

Check it out and let me know!

One thought on “Familiar Motives by Delia James”