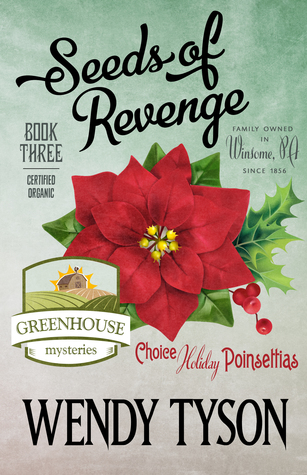 This is the third book in the Greenhouse mysteries by Wendy Tyson.

Megan Sawyer is determined to farm year-round. She’s braving a December snowstorm after pitching her greenhouse greens to Philadelphia chefs when she sees a stranger stranded on the side of the road. It’s Merry Chance’s niece Becca, who’s headed to Winsome to sell her “love potions” at holiday events—or so she thinks.

Merry has an ulterior motive in inviting her niece to Winsome, but Merry’s plan to reunite Becca with her estranged father goes awry when Becca’s father turns up dead. Megan soon realizes that Becca was not the only person in Winsome who despised her father. When Megan’s aunt, the famous mystery author, is implicated through her novels, things become personal. Megan must follow the literary clues while sifting through the victim’s sordid past, but can she uncover the truth before someone else in Winsome is murdered?

Megan Sawyer is a lawyer from the big city come home to be an organic farmer and run the cafe/mercantile. And on the side, solve the occasional murder or two.

The characters in this book and the series are all well-developed, smart, likeable and very real. A smart cozy.

When Megan drops Becca off at her Aunt Merry’s, the reception is fairly hostile. Leaving Megan wondering what was all that about?

When it begins to look like someone is using her aunt’s books to do some revenge killing, Megan jumps in with both feet and does her best to find out who is doing the killing and if she is next.

Great Job! Strong, edgy with characters as real as you.

One thought on “Seeds of Revenge by Wendy Tyson”