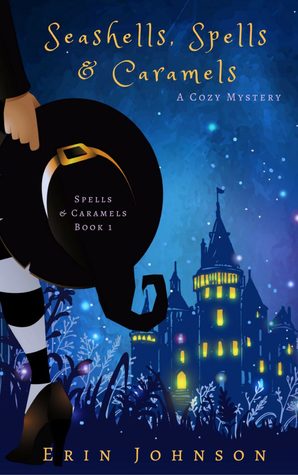 Imogen’s spent her twenties in Seattle, saving every penny and missing every party, to follow her dream of opening her own bakery.

When that dream goes up in flames, she accepts a spot in a mysterious baking contest—one she doesn’t remember entering. She travels to a bustling, medieval village off the coast of France and discovers an enchanting world of magic and mystery, and learns that she, too, possesses powers.

Unable to so much as cast a spell, Imogen struggles to keep up with the other witches and wizards who have come from all over the magical world to the Water Kingdom’s big competition. She juggles relationships with a sweet new friend, a snarky baking fire, and a brooding, handsome baker. As Imogen falls for this bewitching world, she fears she won’t master her magic in time to win the job of Royal Head Baker, and will be forced to return to the shambles of her non magical life.

It only gets worse, when a competitor drops dead in the middle of the big white baking tent, and Imogen’s the prime suspect. Now, she’ll not only have to survive the vampire and psychic judges, but also clear her name by finding the real murderer, before they strike again.
With a killer on the loose, a missing prince, and the Summer Solstice Festival fast approaching, Imogen will have to bake like her life depends on it- because it just might.

I don’t usually accept author requests. But when the author contacted me about this one, I thought well, the cover is cute and Imogene sounds like an interesting character so I gave it a read. And I really enjoyed it!

Full of quirky characters with different magical powers that they have had a long time to hone, Imogene is just discovering she has some pretty special abilities as well. She just has no idea how to use them!

With a little help and advice, she finally makes friends with her fire and gets to baking. When one of the contestants is murdered, Imogene needs to make sure her name is clear and that the contest continues. Imogene has no back up plan, its win the contest or back to her boring and unfulfilling life.

Magic and Baked Goods? Yes, sign me up. This was a fun read. When you read hard-core fiction and non-fiction regularly, a story such as this sweeps all the drama away and just leaves you smiling and laughing.

Well Done Ms. Johnson!  This book will be available on the 29th of this month.