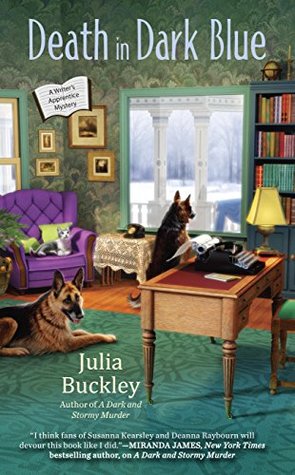 n aspiring suspense author finds herself writing mysteries by day and solving them by night in the second Writer’s Apprentice Mystery by the author of A Dark and Stormy Murder and the Undercover Dish Mysteries.

In the quaint town of Blue Lake, Indiana, Lena London is settling into her dream job, but someone is making her life a nightmare…

Things are beginning to go right for Lena. She’s got a new job assisting suspense novelist and friend, Camilla Graham. She lives rent-free in Camilla’s beautiful, Gothic house. She even has a handsome new boyfriend, Sam West.

After being under attack by the media and his neighbors, Sam has recently been cleared of suspicion for murder. Journalists and townsfolk alike are remorseful, and one blogger would even like to apologize to him in person. But when she’s found dead behind Sam’s house, Lena must dodge paparazzi as she unravels the many mysteries that threaten to darken the skies of her little town and her newfound love with Sam

After having proved in Book 1 that Sam’s wife is still alive, the drama isn’t over. When Lena finds a dead body in Sam’s backyard, things start going crazy all over again.
Reporters descend on the small town and it seems Sam isn’t the only one in this town with secrets.
This is the first of Julia’s books that I have read. She is new to me, but thanks to the excerpt of her Undercover Dishes first book, The Big Chili, I’ll be reading the ones I’ve missed!
I’m always looking for new Cozy authors and it looks as though I’ve found one!
About The Author:
Julia Buckley is a Chicago-area writer. Her first mystery, THE DARK BACKWARD, was published in 2006; since then she has published the Madeline Mann mysteries and the first in the Teddy Thurber series on Kindle.

She writes two series for Berkley Prime Crime, with debut titles THE BIG CHILI and A DARK AND STORMY MURDER

Buckley is a member of Sisters in Crime, Mystery Writers of America, and the Chicago Writers Association. She blogs about writing and mysteries at Mysterious Musings, where she has interviewed almost 200 other mystery writers about their work.

She teaches high school English and enjoys reading, playing Words With Friends on Facebook, and spending time with her husband and two sons, along with their menagerie of animals.