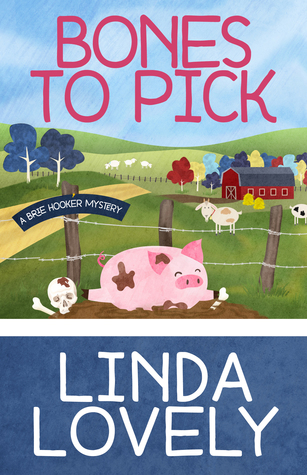 Living on a farm with four hundred goats and a cantankerous carnivore isn’t among vegan chef Brie Hooker’s list of lifetime ambitions. But she can’t walk away from her Aunt Eva, who needs help operating her dairy. Once she calls her aunt’s goat farm home, grisly discoveries offer ample inducements for Brie to employ her entire vocabulary of cheese-and-meat curses. The troubles begin when the farm’s pot-bellied pig unearths the skull of Eva’s husband, who disappeared years back. The sheriff, kin to the deceased, sets out to pin the murder on Eva. He doesn’t reckon on Brie’s resolve to prove her aunt’s innocence. Death threats, ruinous pedicures, psychic shenanigans, and biker bar fisticuffs won’t stop Brie from unmasking the killer, even when romantic befuddlement throws her a curve.

Poor Brie! A Vegan on a goat farm!  This was a first for me with this author. Now that I know she also has another suspense series, it won’t be the last.

With a cast of characters that include Brie, the vegan chef, and her twin aunts who own the Udderly Kidding Dairy, her mom and dad, the handsome vet, the hot moonshine seller, the interesting Mollye ( with an e) this southern mystery was a very fun read.

The characters are well-developed and all had strong presences. The story begins as one of the aunts unexpectedly dies. Brie moves in with her Aunt Eva to help her with the farm and we don’t have to wait long for the bodies!

At the funeral a skull is unearthed by a pot-bellied pig and the action is non-stop from there.

Brie has her hands full trying to clear her aunts name and keep up with hundreds of goats while she tries to keep from getting killed!

I can’t wait for the next one in this series.