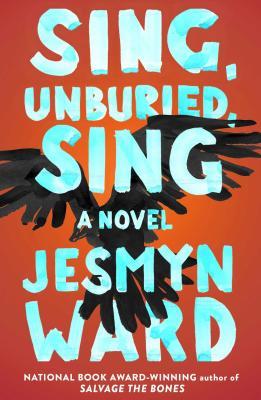 From National Book Award-winner for Salvage The Bones, Jesmyn Ward brings us this look at a place that I am very familiar with. The Gulf Coast of Mississippi. Ms. Ward uses language that pulls you in and makes you see, makes you feel. What an amazing gift she has!

Jojo, who is 13 and his toddler sister, Kayla and Leonie, their drug addicted mother live with Mam and Pop on a farm along the Gulf Coast of Mississippi. Mam is dying of cancer and Leonie is rarely there. She spends most of her time getting high and talking to her dead brother. She is about as unfit to be a mother as the yard dog.

Their father, Michael is currently a guest of the state, at Parchman. Parchman is not a place anyone would go willingly. For years mothers have used it as a way to keep teenagers in line. Just a drive by and you know it’s not a good place. Michael is also white, while Leonie and her parents are black. His family wants nothing to do with Leonie or their grandchildren. But Leonie loves him even though his own family killed her brother and covered up the murder.

When Michael is released from Parchman, Leonie takes the children and her best friend and heads north to pick him up. And on the trip back, it looks like Michael wasn’t’ the only one to get in the car with them. Richie, a spirit, has hitched a ride. He knows Jojo can lead him to Pops and he needs to know what happened to him in Parchman and how he died.

This portrait of Mississippi past and present is one of the most moving, raw, and beautiful stories I have read. Being from the Gulf Coast and knowing The Kill, their claim to fame being the home of Brett Favre and an odd bar with bras on the ceiling, this book made me cry, it actually was painful to read some parts because the author is so brutally honest about a subject few talk about. At least not in Mississippi.

You can pretty it up on the outside, but at the core, it’s still goes on everyday, the racism, the sense that they aren’t as good.

This story of loss, and family and prejudice was heart wrenching. The strength of the characters enduring burdens they should never have had to bear. There is no fairness, no equality, no respect for another human being, and yet they all endure. They keep moving.

Pops was my favorite character in this novel. The way he quietly took what ever came his way and made the best of it. Besides Leonie, the rest of the family never complained, whined or bucked the system in place. They just put their heads down and did what needed to be done.

Thank You to Netgalley and Scribner for this beautiful novel.

One thought on “Sing, Unburied,Sing A Novel by Jesmyn Ward Release Day Congratulation!”