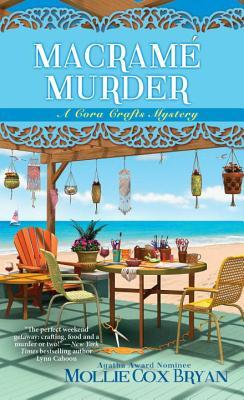 As the head of a bustling crafting retreat, Cora Chevalier could use a break of her own. So she and her creative cohorts temporarily swap small-town Indigo Gap for the Sea Glass Island Craft Retreat, where they teach classes and create beachy crafts like shell mosaics and sea glass chimes. Cora and her boyfriend Adrian are enchanted by their surroundings—especially the stunning wedding and blissful newlyweds they encounter on the beach. But awe becomes shock when the bride turns up dead the next day . . .

The woman’s death appears to be the result of a severe jellyfish sting. But when it’s revealed that she was murdered and Adrian becomes a suspect, Cora must hitch the real culprit to the crime—and fast. Because it just might take everything she has to crack a case more twisted than her most complex macramé knot!

This is the third in the Cora Crafts Series and I think the best one of all! The setting is gorgeous, an island retreat set among beaches of sea glass and possible mermaids.

But when Adrian is hauled in for questioning, Cora realizes she really doesn’t know that much about his past. But she does know he is not a murderer! And when she starts asking questions it turns out that not every one is who or what they say they are!

When Adrian disappears leaving his wrist monitor behind, Cora and Jane shift into high gear to find out who is behind the murders and who has her boyfriend! And hopefully she won’t be next on the hit list!

Mermaids, Psychics, Drug Dealers and More! All tied up into a very satisfying ending!

Cora is such a relatable character. She suffers from anxiety and panic attacks like so many of us here do and it makes her that much more loveable.